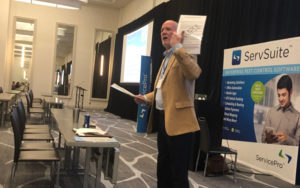 “Claims have changed dramatically since the 1990s,” McGinty began, noting he’s been with LIPCA for 28 years. “Especially now that so much is paperless, and electronic, the communication and discovery processes are very different.”

What hasn’t changed, he said, is the all-important need to document everything, for every account. “Handshake deals are over,” he told attendees. “And yet I’m still seeing it today. But all the clients know is, if something bad happens, it must be your fault.”

He illustrated the point with several true-life examples, including a company spared the misery of a wrongful death lawsuit because its documentation proved it did not use the product implicated in the situation.

“For claims, the best defense is a great offense,” McGinty said. “I love to attack right off the bat. I want them on their heels as soon as possible.” For that to happen, he added, written communication is the way to go, because there is less room for misinterpretation in the written word.

From properly worded contracts, to detailed graphs of the structure, to signed and dated training information, every slip of paper helps in the fight against a claim, he said. If you are denied access by a property manager during an inspection, McGinty suggests you follow up immediately with a letter to that person, documenting when and where you were denied access. Keep a copy of it, and proof that you mailed it yourself.

McGinty also warned to not let your heart get involved and start promising things like “I’ll take care of it,” which takes you into legally murky waters.

McGinty wrapped up his presentation by reminding attendees they don’t have to go it alone. From local, state and national associations, to social media industry groups, to industry experts and consultants, don’t be afraid to reach out and compare notes on contract wording and more.

He also stressed the importance of retaining an attorney that specializes in pest control.

“I’ve seen claims that have gone through because the lawyer didn’t know the difference between a pest and a pole vault,” he said.