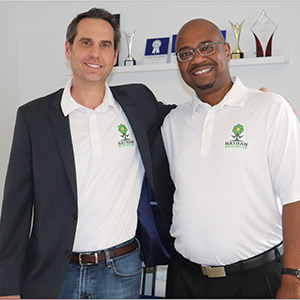 President and CEO Gordon Doran says that Hoyle is a team player and leader who follows one of the company’s core values by “going the extra two miles.”

“People love working with him, and he helps create a team environment that is both positive and proficient,” says Doran in a press release.

In his new role, Hoyle will help Natran expand to Austin, Dallas and San Antonio, Texas.

Hoyle says he is excited to grow knowledge of Natran’s “green” pest control practices in Texas. “I have a 10-lb. Yorkipoo, and I know how much protecting him from the potential dangers of traditional pesticides and pest control methods means. So, our mission of protecting people, pets and our planet really rings true to me and my family,” says Hoyle.

“Since starting my career with Natran,” Hoyle continues, “I’ve learned to be mindful about all the ways to reduce, reuse and recycle. The same practices we use in our work environment, I’ve brought into my own home — and it feels great.”

Founded in 2006, Natran’s objective is to give customers the highest quality pest control possible while using the “greenest” products available. The company focuses on using botanically based pesticides and integrated pest management methods for residential and commercial markets.

Deepen your connection with customers