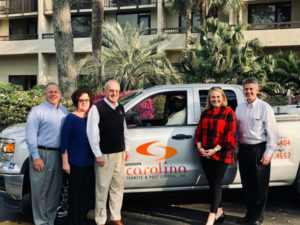 “We are absolutely thrilled to welcome the customers and team members of Carolina Termite & Pest Control to the Arrow family,” says Emily Thomas Kendrick, president and CEO of Arrow Exterminators. “For nearly 50 years, owner Les Shillman and his team have been serving Hilton Head and the surrounding communities in the Lowcountry [of South Carolina] with great care and compassion, and we are honored to continue that commitment into the future.”

“When I first started thinking about selling, I spoke with two of my most trusted people in the industry, and they both told me I should contact Kevin Burns at Arrow in Atlanta,” says Shillman. “I’ll never forget Kevin telling me that Arrow was a special place and that the company had a special family culture. After meeting Emily, her dad — Joe Thomas — and Tim Pollard, I knew we were selecting the right company.”

“Carolina Termite & Pest Control is an established and well-respected name in the state of South Carolina, and we are really proud to have this strong team of professionals join the Arrow family,” states Tim Pollard, Arrow’s senior executive VP and COO. “South Carolina is an important state to us as we look to expand our footprint and bring our service to new markets.”

Carolina Termite & Pest Control will join the other Arrow offices in South Carolina and will operate under the Arrow Exterminators brand.