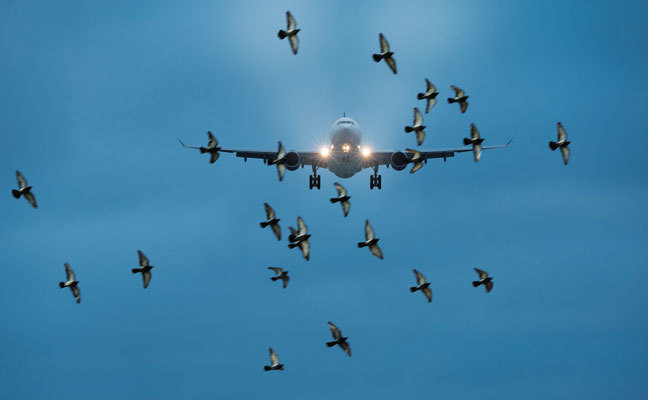 It was the bird strike heard around the world.

Ten years ago, US Airways Pilot Chesley “Sully” Sullenberger averted disaster when a bird strike disabled both engines of his plane and forced him to land in New York’s Hudson River. All 155 people on board survived.

The “Miracle on the Hudson,” as it became known, happened because a flock of Canada geese (Branta canadensis) flew into the plane shortly after takeoff from New York City’s LaGuardia Airport. Minutes later, Sullenberger made an emergency landing in the water.

While pest management professionals (PMPs) aren’t viewed by all as heroes like Sully, they can still play a key role in protecting planes and passengers from costly — and sometimes deadly — bird strikes.

About 14,400 bird strikes occurred at 700 U.S. airports in 2017 alone, U.S. Federal Aviation Administration (FAA) statistics show. Birds cause structural damage when they hit windshields or fuselages, and mechanical damage when they are sucked into engines.

“Generally, the amount of damage is due to the size of the bird species involved,” says Lou Leone, bird division manager for Assured Environments, New York, N.Y. “Also, the behavior of bird species influences the risks.”

The need for wide-open spaces that accommodate long runways — and out-of-the-way locations on undeveloped land — make airports an ideal spot for birds to rest, roost and nest. Tall grasses, trees, shrubs, weeds and brush, as well as structures, provide the cover that bird species need to survive and thrive.

Many airports are situated near bodies of water large and small, such as oceans, lakes, rivers, wetlands and drainage ponds. Birds have their pick of water sources.

Food is plentiful, too, whether it’s the seeds, berries, grass, insects and other small animals found in nature, or discards from airport employees and patrons. Managing or eliminating the food, water and cover that bird species need to survive may help keep bird-related hazards under control, but will not eliminate them entirely.

Making an airport less attractive to birds makes aviation safer. But bird strikes are not the only hazard:

How can you deter pest birds from landing, roosting and nesting in airplane hangars, terminals, loading docks, roofs, ledges, signs, walkways and bridges at airports?

“Bird control is critical to the health and safety of the public,” says John Livingston, bird remediation specialist for Varment Guard Wildlife Services, Columbus, Ohio. “Hundreds of thousands of people pass through, visit and work at these transportation hubs around the world.” 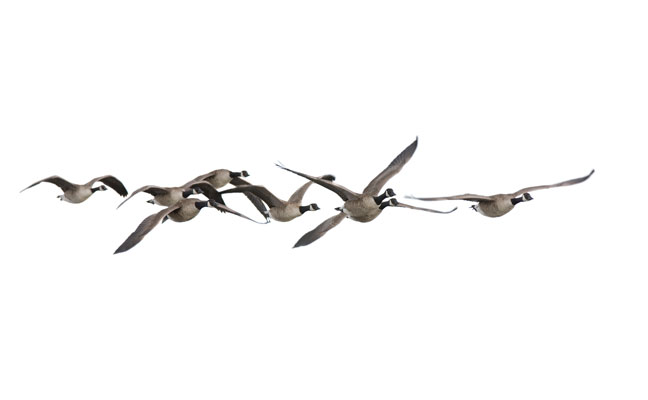 Often, airports are located along bird species’ migratory paths. For example, FAA data shows that the Kansas City International Airport, which was built along a bird migration route known as the Mississippi Flyway, had more bird strikes than any other U.S. airport in 2018, according to a report in USA Today. The airport, which had 127,449 annual flights, reported 16.48 bird strikes per 10,000 flights in 2018.

The U.S. Migratory Bird Treaty Act (MBTA) limits the actions that can be taken against the bird species it covers. Passed in 1918 and updated periodically to include additional species and expand its reach, the MBTA makes it illegal to take, possess, import, export, transport, sell, purchase, barter or offer for sale, purchase or barter any migratory bird, or the parts, nests or eggs of these birds, except under the terms of a valid federal permit.

About 90 percent of bird strikes in the United States are by species federally protected under the MBTA, according to Bird Strike Committee USA, an organization comprised of volunteers from the FAA, U.S. Department of Agriculture (USDA), U.S. Department of Defense, and the aviation industry.

PMPs have options, however. They may obtain permits if the birds are causing, or have the potential to cause, a serious threat to the health and safety of the public, and when non-lethal control methods do not solve the bird-related problems.

The U.S. Department of Transportation, the FAA, and the USDA Animal Plant and Health Inspection Service (APHIS) are tasked with preventing bird strikes by issuing regulations and guidelines designed to minimize the occurrence.

The FAA establishes rules for how birds and other wildlife are managed at certified airports; classifications are based on the air carrier operations they serve. To determine the species of birds and what attracts them to the airport and surrounding areas, a wildlife biologist trained in bird hazard assessment will conduct an ecological study.

“The runways and the property away from the terminal are controlled by the USDA,” Livingston says. “The USDA APHIS uses private sector contracts to help control and protect birds and wildlife on the runways.”

PMPs can provide the bird management services called for in a WHMP (see “Bird control options” on p. 36). No permit is required for any bird species if harassment is the control method.

Leone says the most common bird species you will find at an airport are pigeons, starlings, sparrows and geese. Blackbirds, crows, Canada geese, cormorants, grackles, gulls, house finches and vultures are among the other bird species frequently found at airports.

Birds have been a problem since the advent of aviation. According to the FAA, Orville Wright reported the first bird strike in 1905. The problem not only persists, it is getting worse thanks to new turbine aircraft engines made with lightweight parts. Faster, quieter aircraft give birds less time to move out of an airplane’s flight path. Mid-air aircraft issues aside, the actual airport structures can be protected by PMPs.

“They are an aesthetic issue, but can also cause damage to the buildings at the airport,” says Jeff Weier, technical director for Sprague Pest Solutions, Tacoma, Wash.

Weier concurs, saying pest control licenses cover PMPs for bird control, although some states require a license from their governing fish and wildlife agencies to trap birds. “You have to research each state’s regulations and laws,” he says. “It’s your responsibility to know what you need to do the work properly.”

An understanding of bird biology is imperative for effective bird management. Sprague Pest Solutions has a bird specialist on staff with a background in ornithology, for example. “You might know the biology of certain birds, where they might be roosting versus other birds, so you can put your traps or control methods in those areas,” Weier says. “Identifying a species is sometimes difficult.”

Pigeons, starlings and English sparrows are just a few of the bird species Weier encounters when performing bird control in and around airport terminals. He says PMPs may need a contractor’s license to install netting in some areas, although it depends on the jurisdiction. 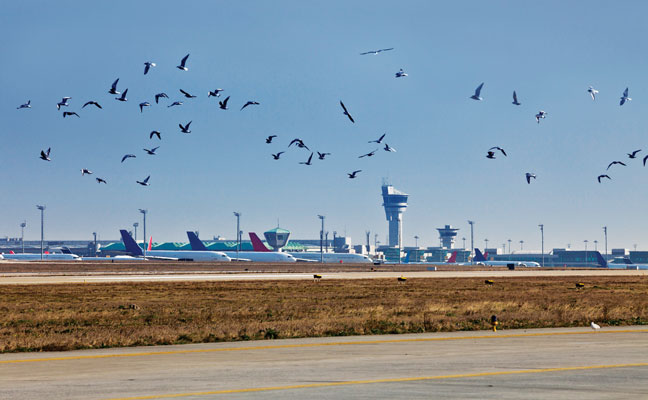 Proper identification of bird species is just one of many challenges with airport work.

“There are so many challenges at airports,” Livingston says. “This unique center of transportation is under day-to-day scrutiny from many different entities.”

He says PMPs must adhere to regulatory laws, be subject to government oversight, follow airports’ administrative requirements, and be mindful of the public and employees who frequent airports.

At Assured Environments, Leone conducts training in-house and in the field. Technicians who work on the company’s bird division team only perform bird control work.

Sprague Pest Solutions has some technicians fully dedicated to bird management. “We have people in each office that are the primary bird control people; they do other work but when a bird job comes up, they are the ones doing it,” Weier says. “Bird control takes some time to become proficient. People doing those jobs need to be specially trained and have experience.”

Weier says airport work often combines construction and pest control. “Exclusion is one of the primary tools in bird control, and that means you have to deal with building and modifying structures,” he says.

PMPs may need special training on the equipment required to install control methods on buildings. They must also have a good understanding of the materials they’re dealing with — for instance, walls made of concrete or metal — and the tools needed to work with them.

Understanding the target bird helps PMPs select appropriate control methods. Get to know the species’ flight patterns, eating and nesting habits, mating season and most of all, why they are attracted to the airport.

As with general pest control customers, communication with bird control accounts is key. “We need to understand how customers’ equipment works to find the right solution, without interfering with the day-to-day workings at the airport,” Livingston says.

Leone says he and his team work around their customers’ needs because airport schedules typically conflict with normal work schedules.

“Educating clients is our top priority, to help them understand the benefits and the effectiveness of the deterrent,” Leone says. “There’s a proven deterrent method for every bird species we encounter.”

Of course, PMPs cannot control bird species that are doing what they do best: flying the friendly skies. The Canada geese that caused the “Miracle on the Hudson” were flying at approximately 2,900 feet, according to scientists at the Smithsonian Institution who examined the feathers obtained from the downed plane.

The Smithsonian Institution’s Feather Identification Lab analyzes feathers and conducts DNA tests on the remains from bird strikes. They estimated the geese weighed 8 pounds and were not native New Yorkers, but instead hailed from Labrador, Canada.

In a 2009 interview with Katie Couric, then-correspondent for “60 Minutes,” Sullenberger said, “About 90 seconds after takeoff, I notice there were birds filling the entire windscreen from top to bottom, left to right. Large birds, close; too close to avoid.”

When Couric asked whether he realized the bird strike caused damage, he told her, “When I felt, heard and smelled the evidence of them going into the engines. I heard the noises. I felt the engine vibrations, of the damage being done to the engines. And I smelled what I described at the time, and I still would as a burned smell being brought from the engine area into the conditioning system of the airplane.” 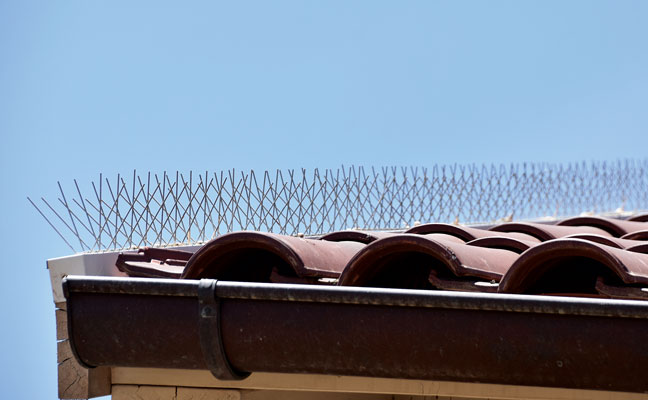 Airports rely on bird control to protect passengers and airline personnel and minimize damage to aircraft. The solutions available to manage birds are almost as varied as the species themselves. To safely install solutions where birds are a problem, PMPs should be certified by the U.S. Occupational Safety and Health Administration (OSHA) to operate lifts and work on scaffolds.