How to evaluate a detector dog for food drive 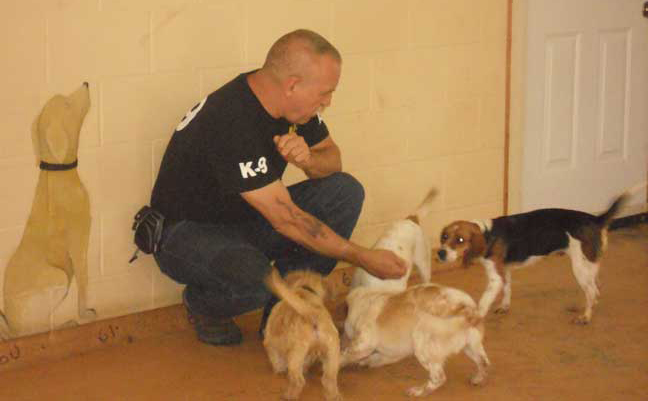 This segment continues the process of evaluating detector dogs. This time we’ll focus on food-rewarded dogs.

The key to success with training food-rewarded dogs is to choose the right dog to begin with. So let’s talk about how to do that.

Once I’ve chosen a dog, based on its sociability and self-confidence, I then will present a reward to measure the dog’s desire to get whatever I’m offering.  If the dog tries to get at a piece of food I’m holding, just out of reach, I’ll toss it into the kennel to see how the dog scrambles after it. I’ll toss a piece maybe behind its house or blanket to evaluate whether the dog will hunt for the treat until it finds it. After a few throws, I may fake tossing a piece of food. This will give you an idea of how motivated the dog is to hunt for the food.

To start the food drive evaluation, I’ll take the dog into a room with at least some furnishings for the test. First, I’ll toss several pieces of food on the floor, while the dog watches and allow the dog to scramble after them, catch and eat them. Next, I’ll toss a piece of food under a piece of furniture that the dog can crawl under. Does the dog readily scramble under to get the food? Does the dog stick its nose under, maybe paw frantically trying to get the food?

If we’ve found a dog that passes the tests, let’s train that bed bug dog.