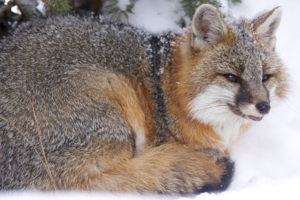 The new strain of canine distemper virus was found in two gray foxes similar to these foxes. PHOTO: VERMONT FISH AND WILDLIFE DEPARTMENT

Pathologists found all animals were infected with a distinct strain of the virus that had been identified only in a single raccoon in Rhode Island in 2004, which was not described in any publication. The eight animal cases also represent the only reports of any canine distemper virus isolated from New Hampshire and Vermont in the GenBank database.

“This can and may already be having an impact on the population of wild mesocarnivores in New Hampshire and New England,” says Needle. “These animals are an integral part of the varied ecosystems of wild New Hampshire and New England, filling important niches in predator-prey relationships and pest control. Any decrease in wildlife populations is a loss to the rich wild diversity. The affected species also are furbearing mammals that serve as part of the cultural heritage of the northern sportsman.”

Canine distemper virus vaccination is part of the core vaccine protocols for domesticated dogs. All dogs should be vaccinated routinely. Canine distemper virus infection in dogs is most often characterized by respiratory disease, oral and nasal discharge, gastroenteritis, and as the disease progresses, neurological disease. This is a severe, highly pathogenic and highly contagious disease, so any suspected infection should be reported immediately to a veterinarian. Any unvaccinated animals should be vaccinated.

The results of this case are presented in the Journal of Veterinary Diagnostic Investigation. The research is supported by the New Hampshire Agricultural Experiment Station and the State of New Hampshire.