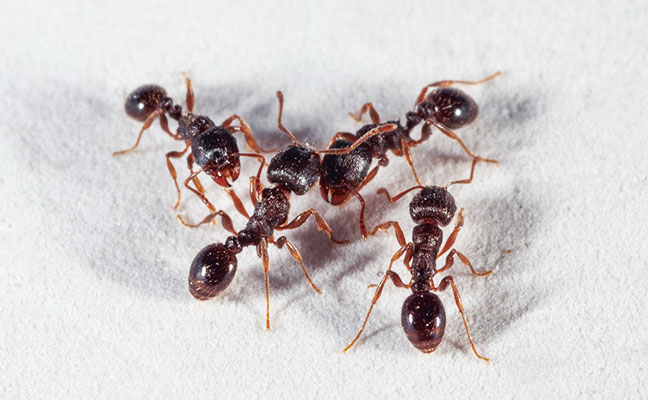 Pavement ants are about 1/8-inch long, with characteristic ridges running the length of their head. PHOTO: JOHN OBERMEYER, PURDUE UNIVERSITY

Tetramorium caespitum are widely known to engage in massive, drawn-out battles in territorial disputes. They are found to nest in areas with minimal vegetation, which explains their predisposition to urban habitat and why they thrive in human-modified environments. It is currently unclear as to where the ants nest exactly in or around structures, or if they damage them. However, their common name — pavement ants — is derived from their tendency to nest around foundations, sidewalks, driveways, and other man-made structures that interface with the soil.

Territorial disputes happen often in pavement ants, so it is implied that territoriality is a very important aspect of the biology and ecology of the species. Territoriality might be looked at in terms of nest area or areas being foraged. Although some ant species do not necessarily defend territories, there are many ant species that do, including pavement ants. Studying them as they forage above-ground is a useful research tool.

Pavement ants are social insects. The queen relies on workers to find and bring food into the colony to share via trophallaxis (grooming) among themselves, the queen, and the brood. Previous studies have determined that when using bait to control ants, the bait’s active ingredient should have delayed action over a wide dosage range, be readily transferred from one ant to another, and not be repellent to the ants.

Nine residential buildings on the Purdue University campus and nine residential buildings in an apartment complex in West Lafayette, Ind., were used to evaluate the effectiveness of a 0.01 percent thiamethoxam insecticide gel bait. Each building was divided equally among three treatment categories: target, blanket, and untreated control. Each building used in this study was divided into twenty 17-foot-long “territorial units” — based on the smallest pavement ant colony found (as determined by aggression assays, where the lack of aggression defined the borders of each colony). 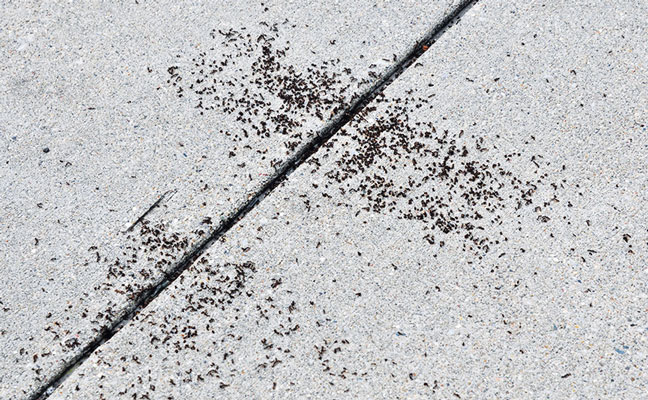 Our study findings suggest the decision to perform the blanket or targeted treatment comes down to two factors:

In an account where an ant problem is extensive, for example, blanket baiting as an initial treatment may be followed by target baiting (on an as-needed basis) to provide favorable customer satisfaction.

An interesting finding in our study was how serious a pavement ant problem can be in some parts of the U.S. As they relate to the “territorial units” (based on the smallest colony size we found in the two areas of West Lafayette, Ind.), which were of the smaller territorial/colony size:

DR. BENNETT is an entomology professor and director of the Center for Urban and Industrial Pest Management at Purdue University, West Lafayette, Ind. He is also a PMP Hall of Famer (Class of 2006).