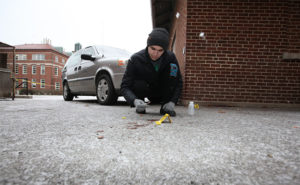 A student investigates the ground at a test crime scene in the snow. PHOTO: TOM CAMPBELL

“Nobody has ever done this before. There have been other classes taught in forensic entomology, but they’ve never had a formalized program that is entirely focused on it,” explains Dr. Stamper.

Pre-law and pre-med students are only a few examples of those who could benefit from the new program.

“This concentration would make students well-suited to be a crime-scene technician, and would give them an advantage because they would have the ability to take the American Board of Forensic Entomology technician certification as they graduate,” says Dr. Stamper. “It also makes an excellent entomologist. It’s a very versatile area of concentration.”

Dr. Stamper, who was deeply involved in the establishment of the new concentration, is excited to see years of planning come to fruition. “I was part of the team that recently redesigned the insect biology major. At the same time, we began conversations about what a new area of concentration might look like. It was my job to plan the next steps. As the new insect biology major was taking shape, I was making notes on how we could transform it with an area of concentration.

We teach many classes in forensic science that have very little entomology in them,” continues Dr. Stamper, “but there’s a ton of entomology that is forensic in nature. We’re now highlighting that with a new series of forensic entomology core courses.”

Students who enroll in the program will be exposed to urban, stored-product, medicolegal, medical and veterinary entomology.

“They can actually go into any of those sub-disciplines,” explains Dr. Stamper. “Purdue has world experts in each of them. Those types of jobs are very well-paying and are in high demand.”