World Mosquito Day is an international effort to raise awareness of the insect’s status as the world’s deadliest animal. In recognition of the day, Terminix — a ServiceMaster company — released its 2019 ranking of the country’s Top 50 cities most infested with mosquitoes. 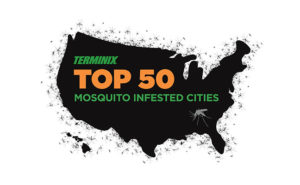 Los Angeles, Calif., took the top spot, jumping from its No. 5 ranking in 2018. Dallas-Fort Worth, Texas, fell to No. 2 after two years at the top of the list, followed by Houston, Texas; New York, N.Y., and Washington, D.C. Texas and Florida dominated the list, with six and five cities in the Top 50, respectively.

Mosquito-borne diseases kill millions each year across the globe. In the United States, mosquitoes can transmit serious diseases such as West Nile virus and encephalitis. Globally, mosquitoes are vectors for other deadly illnesses, including malaria and Zika.

“We are steadfast in our mission to protect our customers and their families from threats like mosquitoes,” says Matthew Stevenson, president of Terminix Residential. “From providing expert advice to treating a backyard, every homeowner deserves a partner who can provide a healthier and safer environment to enjoy the outdoors.”

Homeowners should be particularly cautious as the United States experienced the highest level of precipitation in recorded history over a 12-month period this summer. Heavy rains may lead to increased standing water for mosquitoes to breed, unleashing higher than normal mosquito populations.

Terminix based its ranking on the number of services rendered in each city in the last year*. The full list of the Top 50 cities is:

*This ranking was created by compiling mosquito-specific data of services rendered at more than 300 Terminix branches across the country. The rankings represent Metropolitan Statistical Areas (MSAs) with the highest number of actual services between June 16, 2018 and June 15, 2019.