The National Pest Management Association (NPMA) is educating consumers about mosquitoes with the results of its new video project – Mosquito Multiplier.

The time-lapse video shows just how quickly mosquitoes are able to multiply right in their own backyards. By recreating ideal conditions that allow mosquitoes to thrive, researchers were able to capture the breeding power of mosquitoes.

“The Mosquito Multiplier project is a visual simulation that’s designed to show homeowners exactly how mosquito populations can explode under the right conditions,” says Dr. Jim Fredericks, chief entomologist for the NPMA. “Our team of experts took mosquito eggs and hatched them under controlled conditions that mimic those you would find in a typical backyard, and in less than a week, we had over 5,000 mosquitoes.”

Found all across the country, mosquitoes thrive in warm, wet areas and only need as little as half an inch of water to breed, turning seemingly innocent items such as kiddie pools, wheelbarrows and overturned frisbees into potential breeding grounds.

“To reduce the likelihood of mosquitoes breeding on your yard, conduct a survey of the property at least once a week and eliminate any areas of standing water,” says Dr. Fredericks.

Able to spread West Nile virus, malaria, dengue and Zika virus to humans, mosquitoes are considered the deadliest animal on earth. According to the World Health Organization, mosquitoes are responsible for several million deaths and hundreds of millions of cases of vector-borne diseases every year. With more than 150 different species of mosquitoes found in the United States alone, vigilance is key to preventing an infestation. 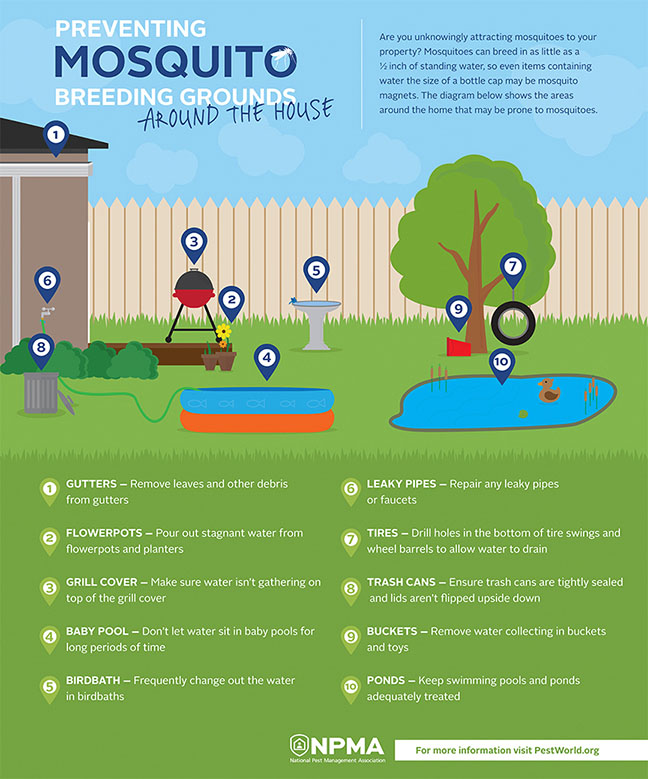