LR Tullius represented and acted as exclusive financial adviser to Dayton’s Pest Control on the transaction. 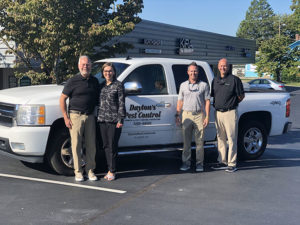 Dayton Hylton started Dayton’s Pest Control in 1985 in the basement of his parents’ home. Since then, it has grown into an enterprise of more than 35 professionals.

“Thirty-five years ago, I began this business with a passion to serve others while pursuing my dream of a career in entomology,” says Hylton. “In 2003, my wife, Sheila, joined Dayton’s, and we have been blessed to expand the Dayton’s team and our impact within the community through service to thousands of Knoxville residents. We are honored to entrust Waynes with our team and look forward to the opportunities that this will create for them and the customers we serve now and in the future.”

Dayton’s will maintain its brand initially but will eventually transition into the Waynes brand. Dayton and Sheila Hylton will aid with the transition and serve in a consulting role during that time, reports Eric Frye, president of Waynes.

“From the moment I met Dayton and Sheila Hylton, I knew that their team and overall commitment to the customer would be well aligned with our values of integrity, courage, perseverance and character, and our commitment to world class service — every time,” says Frye. “That has been further solidified since meeting their team following our announcement on Sept. 3. This partnership with Dayton’s will allow us to effectively serve Knoxville, Tenn., and surrounding communities, while also capitalizing on existing relationships within the market.”

Founded in 1973, Waynes began as a pest and termite control company but has since expanded its offerings to other home-care services. The company currently operates throughout Alabama, Mississippi and Tennessee. Waynes was recently acquired by Stockholm, Sweden-based Anticimex. As part of the transition, Eric Frye was named president of Waynes operations. Former CEO Steven Splawn remains a senior adviser to Waynes and Anticimex.