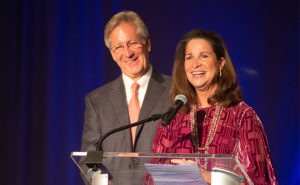 Caritas of Austin honored Jan and Bobby Jenkins — owners of ABC Home & Commercial Services — with the 28th annual Harvey Penick Award for Excellence in the Game of Life for their philanthropic efforts.

The award honors those whose leadership and good works inspire lasting change in Central Texas. As owners of ABC Home & Commercial Services, Jan and Bobby Jenkins have successfully instilled a culture of philanthropy among their employees and their family, a culture that impacts programs on a state and national level, according to Caritas of Austin.

The Jan and Bobby Jenkins were honored on Sept. 12 at Caritas of Austin’s 12th annual Words of Hope dinner, the organization’s largest fundraising event. Each year, the event features powerful stories that reflect the mission and work of Caritas of Austin. More than 500 sponsors and attendees were present for this year’s event, which raised more than $600,000 to support the organization’s mission to prevent and end homelessness in Austin, Texas.

Honorary remarks highlighted the couples’ significant community contributions to organizations like Caritas of Austin, Helping Hand Society, Good Shepherd Episcopal School, American Heart Association, United Way, Alzheimer’s Texas, College for All Texans Foundation and many others. Closest to their heart is the Moss Pieratt Foundation, created in honor of their grandson, Moss. The Foundation raises funds for research and awareness to support the Sudden Unexplained Death in Childhood Foundation.

“The Jenkinses are the spearhead, the tip of the arrow; their actions truly do speak louder than words,” says Tom Meredith, 2018 Harvey Penick Award honoree.