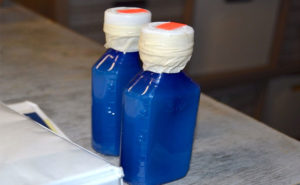 These two unlabeled bottles led law enforcement in both Carolinas to pursue an illegal pesticide case that claimed the lives of a pair of pets. PHOTO: CLEMSON UNIVERSITY PUBLIC SERVICE AND AGRICULTURE

Mike Weyman, deputy director of Clemson University’s Regulatory Services unit, which includes the Department of Pesticide Regulation, heads the effort, with co-leader George Saxton of the Office of the Indiana State Chemist, Dr. Jim Fredericks of the National Pest Management Association, Stephanie Binns of Responsible Industry for a Sound Environment and Aline DeLucia of the National Association of State Departments of Agriculture.

“States have been addressing this case by case and the cooperation has been excellent, but the quantity of cases just continues to grow,” Weyman says in a Clemson media release. “All of a sudden there’s been a rash of counterfeits. Every single major pesticide company has had problems with counterfeiters. This will give us a protocol and practice to attack the problems together and get ahead of the curve.”

One case that catalyzed the founding of the task force involved a North Carolina pet owner who purchased a flea and tick killer for her two adult dogs from a local store. The bottle had no label, but she said she wrote down the verbal instructions she was given: “Apply 1 cc via syringe to each dog.” She did, using the dropper included in the bottle to give her dogs one drop each orally.

Her dogs died. She had tests run to find out why. Lab results showed the product contained the common insecticide imidacloprid, but at more than five times the recommended dose. Plus, imidacloprid is supposed to be administered on the nape of the animal’s neck and be absorbed by the skin.

The sale of illegal and counterfeit pesticides continues to grow as e-commerce explodes. Last year, PMP reported on a $1.2 million settlement Amazon paid to the U.S. Environmental Protection Agency for the company’s alleged role in allowing third parties to sell and distribute imported pesticides not licensed for sale in the United States. The illegal pesticides were imported from China.

Weyman says consumers should be on the lookout for signs that the product is illegal. For one, it must have a label. If there is a label, read it for the following:

A little reading goes a long way in Weyman’s view. He advises that use of the metric system on the label is an easy-to-spot clue that the product isn’t made for sale in the United States.

“We had one bottle from Asia that made it clear they knew what they were doing was illegal when they sold it,” says Weyman. “Written in Chinese it said: ‘Very Important: Do this with a brain do not get caught by Department of Public Health.’”