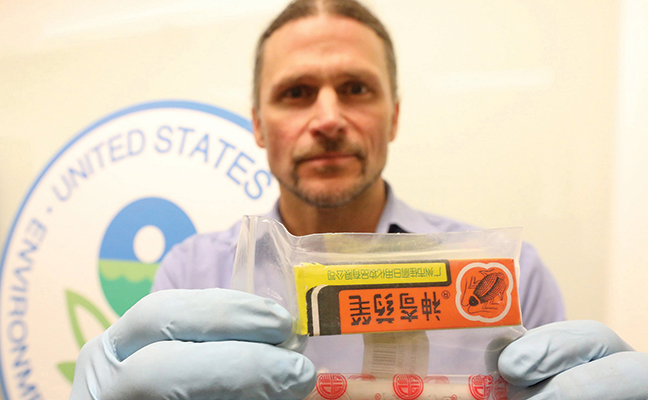 Controlling online sales of illegal pesticides is as easy as herding cats. But in February, the biggest e-commerce “cat” — Amazon — agreed to pay $1,215,700 in administrative penalties to the U.S. Environmental Protection Agency (EPA), to settle allegations the company committed nearly 4,000 violations of the Federal Insecticide, Fungicide, and Rodenticide Act (FIFRA) over the past five years.

The landmark settlement stemmed from Amazon allegedly allowing third parties to sell and distribute, from Amazon warehouses, imported pesticides even though the products were not licensed for sale in the United States. Imported from China, the illegal pesticides included:

The EPA reports that Amazon notified all of its customers who purchased the aforementioned illegal pesticides of related safety concerns and urged proper disposal of the products. The agency also says Amazon has refunded those customers the cost of the products, an estimated $130,000 total.

As part of its settlement with the EPA, Amazon agreed to develop an online training course covering pesticide regulations and policies, and make it available to the public and online marketers, in English, Spanish and Chinese. The EPA says successful completion of the online course will be mandatory for all entities planning to sell pesticides on Amazon.com. The EPA also says Amazon has created a “robust [pesticides] compliance program” comprised of a computer-based screening system, backed up by numerous trained staff.

“This agreement will dramatically reduce the online sale of illegal pesticides, which pose serious threats to public health in communities across America,” states EPA Region 10 Administrator Chris Hladick. “Amazon is committed to closely monitoring and removing illegal pesticides from its website, and EPA will continue to work hard to ensure these harmful products never reach the marketplace.”

Specialty pesticide manufacturers and distributors, and attorneys serving the professional pest management industry, say they’re encouraged by the recent crackdown on illegal imported pesticides. However, several industry insiders caution that the EPA’s landmark settlement with Amazon is but a symptom of online resellers violating FIFRA.

“Can you believe this is going on every day?” asks Mark Boyd, president of Control Solutions Inc. (CSI), a Pasadena, Texas-based manufacturer of pesticides and other specialty chemicals for professional pest management and other markets.

“So the big cat got its paw slapped,” Boyd adds. “That doesn’t mean Amazon won’t misstep again. And there are plenty of other cats out there selling illegal pesticides online. If someone dies as a result of this, activists and many in the media will again wrongly broad-brush all pesticides and PMPs as bad.”

The Amazon-EPA FIFRA settlement was one of the largest ever. Equally important, it marked a successful attempt to begin to coral the country’s largest online retailer from unpoliced pesticide sales to consumers — and some pest management professionals (PMPs) — around the world.

According to data from One Click Retail, Amazon generated about 44 percent of all U.S. e-commerce sales last year. (eBay, Walmart, Apple and Home Depot, in that order, rounded out the country’s e-commerce Big 5.)

When PMP contacted Amazon for comments for this story, a spokesperson directed the reporter to the company’s official statement:

Regulatory compliance is a top priority at Amazon. Third-party sellers are required to comply with all relevant laws and regulations when listing items for sale on Amazon. When sellers don’t comply with our terms, we work quickly to take action on behalf of customers. We will continue to innovate on behalf of our customers and to work with brands, manufacturers, government agencies, law enforcement, and others to protect the integrity of our marketplace.

The EPA’s investigation into the illegal pesticides reportedly started with summer interns at the agency’s headquarters in Washington. The interns surfed the web for unregistered pesticides offered by online retailers. With the ongoing seismic shift away from brick-and-mortar retailers, controlling online sales of illegal pesticides is becoming increasingly problematic.

“The Amazon case is an important one because it sends a strong message that will have a deterrent effect,” the EPA reports.

The historic Amazon-EPA settlement is far from a cure-all. As this story is being read, countless illegal pesticides are being sold online. The EPA cautions online buyers to:

“The internet is a market for the distribution and sale of pesticide products, and much of it is successfully regulated under FIFRA,” the EPA adds. “It is the seller’s responsibility to ensure that pesticides sold over the internet are properly labeled and registered in accordance with FIFRA.”

EPA officials say there are three basic types of FIFRA violations that the national and state agencies encounter regularly:

With the exception of Wyoming, whose EPA work is handled by a regional office in Denver, Colo., states have primary enforcement responsibility for pesticide misuse violations. The EPA encourages individuals with knowledge of these types of violations to report them to their respective state government offices that regulate pesticides — typically, each state’s department of agriculture. Other FIFRA violations can be reported to the EPA online.

A grave matter by itself, unfortunately, illegal imported pesticides are but a symptom of a broken system.

Many times, FIFRA violations involve pesticides that are registered with the EPA and licensed for sale in the United States.

There’s money to be made in today’s Wild Wild West known as online pesticide sales. For example, one third party reportedly is buying 78-oz. jugs of a registered concentrated pesticide for $95 per unit and repackaging each jug’s contents into 97 mini 0.8-oz. bottles that are later sold online for $8 apiece, or $776 total. Not bad — a $681, or 717-percent profit — except that such repackaging and reselling of EPA-registered pesticides is illegal; it violates FIFRA. Equally concerning, this is just one of countless such cases that can be found online.

“What’s going on online is horrific,” Clark says. “Industry pesticide manufacturers and distributors, and the country’s more than 150,000 professional service technicians using our products on the front lines, invest significant time, money and care to ensure we are stewards of the environment and protectors of public health and property. But then there are hundreds, if not thousands, of these shady online outfits that will buy, repackage and resell anything to anyone — regardless of pesticide labels or laws.”

Not always ‘as advertised’

Dr. Cisse Spragins, founder and CEO of North Kansas City, Mo.-based Rockwell Labs Ltd, has been encountering FIFRA violations for years, and has taken action at times to report them. Rockwell has several minimal-risk pesticides exempt from FIFRA, per FIFRA 25(b), and takes pride in ensuring its products meet regulatory requirements and efficacy claims.

“The most common violations are products that seem to be presented as FIFRA 25(b) exempt products, but that don’t meet the requirements either through labeling, ingredients used or both,” Dr. Spragins says. “We also see various products labeled with pest control claims that aren’t registered. Most of these aren’t actual unregistered synthetic pesticides — like Chinese chalk — but more commonly, microbial and/or cleaning products, or natural-based products with pesticide claims that don’t meet FIFRA 25(b) requirements.”

Dr. Spragins offers as an example a case in which the Federal Trade Commission (FTC) was investigating a company for its cedar oil-based liquid products that it claimed would treat and prevent bed bug and head lice infestations. In September 2012, the FTC filed deceptive advertising charges against the company.

“We reported to both the EPA regional investigator and the FDA investigator, back when they were investigating the case, that the inert ingredient listed on the label is not what is actually in the product, based on our analysis, and the actual inert being used in the product does not qualify for FIFRA 25(b) exemption,” Dr. Spragins explains, referring to the EPA and the U.S. Food & Drug Administration. Six years later, she says, “Nothing appears to have changed. We have also made some reports to states, many of which do register FIFRA 25(b) on products that are out there that don’t actually meet the requirements.”

While Dr. Spragins points out that “the online world is difficult to control in a top-down manner,” she is hopeful the problem will diminish in the future.

“EPA’s recent clarification of FIFRA 25(b) requirements has been helpful to remove many of the gray areas that existed,” she adds. “This helps states to better enforce the requirements and to make better registration decisions.”

Dr. Spragins’ advice to PMPs and their customers is “buyer beware.”

“Everything you read on the internet isn’t true,” she adds. “PMPs are best served by buying from companies they know, and who have data and credibility to back up their product claims.”

“When I first read about the Amazon-EPA settlement, I thought, ‘$1.2 million? Really? That’s all they have to pay?’” says Andy Linares, president of Bug Off Pest Control Center, a Manhattan-based industry distributor with brick-and-mortar and online sales operations.

Linares says it’s critical to underline that Bug Off and several other professional pest management industry distributors “closely abide by FIFRA, the letter of the law,” including ensuring those who buy RUPs are certified pesticide applicators, and that the products they purchase are licensed for use in their state(s).

“This really gets my ire up,” Linares says. “Our industry has been tarred and feathered by shady stuff like this Amazon deal for decades. What’s it going to take for regulators to wake up and take real action?

“Enforcing FIFRA doesn’t have to be as difficult as we’re making it,” Linares adds. “Hire more interns to scour the web, and assemble a task force comprising key national and state entities to enforce the law.”

“Today, online you can find a dozen or more sources for most of the pesticides and rodenticides we offer,” Reeves says. “Some of these online products are legit, some aren’t.”
Equally concerning, Reeves says potential problems can begin downstream, with online sales of active ingredients.

“Believe it or not, I’ve had a few pest control operators tell me that on Alibaba.com they can buy drums of active ingredients from China, and cheaply create their own pesticides on the fly,” Reeves adds. “Some ask for formulator contacts. Many don’t know the time, testing and money required to do it right, in accordance with FIFRA.”

The PMP staff can be reached at pmpeditor@northcoastmedia.net.