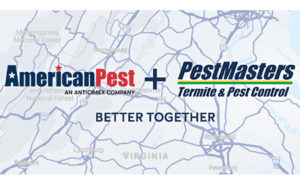 Richmond, Va.-based PestMasters Inc. has been acquired by American Pest, an Anticimex company based in Fulton, Md.

The family-owned firm was begun in 1953, and its owner and CEO, Dave Boose is a past president of the Virginia Pest Management Association (VPMA). He chaired the VPMA Legislative Committee for more than two decades, and helped develop and implement many of the Commonwealth’s pesticide laws and regulations.

In a press release, Boose noted that “we have always valued the trust that business owners and homeowners alike have placed in our services and staff. With this merger, we found a partner with the same culture and focus on service excellence that can also offer a wide array of other advances and services to compliment what PestMasters already provides.”

Terms were not disclosed, but PMP magazine financial columnist Dan Gordon, CPA, of PCO M&A Specialists (a division of PCO Bookkeepers), and his team acted as exclusive financial advisor.

“I could not have done it without PCO M&A Specialists,” Boose tells PMP. “Their depth of knowledge and experience in terms of taxes, legal and navigating the due diligence process was what made the transaction go so smoothly. I recommend them to anyone selling a business.”

PestMasters is American Pest’s 11th acquisition in 36 months, bringing 20 additional pest professionals to its growing team. Its most recent acquisition before this was Annapolis Pest Control in Anne Arundel County, Md., in July.

American Pest was founded in 1925, and currently boasts more than 160 employees throughout Washington D.C., Maryland, and Northern Virginia.

“We look forward to building a relationship based on the respect and trust that PestMasters has provided to their customers,” American Pest President David Billingsly said in a press release. “Their skilled pest control professionals will be a great addition to our team.”

- Protect yourself against email scams
This article is tagged with American Pest, Anticimex, Dan Gordon, Mergers and Acquisitions, PCO Bookkeepers, Virginia and posted in News