How realistic are ant emojis? An entomologist weighs in 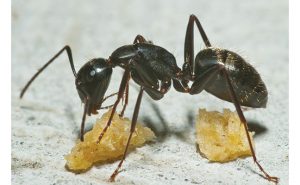 What does this ant think about pixelated likenesses of it and its cousins? The world will never know. (Photo courtesy of, and copyrighted by, Gene White, pmimages@earthlink.net)

When an anonymous entomologist who goes by CurlicueCal on Tumbler (bio: “just an ordinary oujia board operated by a colony of ants”), he or she probably didn’t predict the media stir that would unfold from a late-night, tongue-in-cheek post from June 2018 titled “An entomologist rates ant emojis.”

More than a year later, it’s still making the rounds, thanks to recent reposts by Comic Sands and Bored Panda. It’s because of the unusual subject matter: CurlicueCal examined the emojis (digital icons used primarily in smartphone texting) of ants, as designed by various platforms. My guess is that he or she encountered the roundup, like I did today, on Emojipedia — but then developed strong opinions about them. He or she then decided to rate the realism of each version, to hilarious effect.

The original post deserves to be read in its entirety, but I’ll share two spoilers: CurlicueCal gives Mozilla’s ant emoji a -10 out of 10 because, well, “it’s a termite.” The biggest winner?  Apple’s version for being “round and huggable,” as well as more anatomically correct than its counterparts. But a story done on the post by Quartzy back in 2018 interviewed other entomologists who disagree.

I’m curious to know what PMP readers think, since they well know the ins and outs of ant physiology, too. Take a look again here, and then sound off below or email me at hgooch@northcoastmedia.net. My many, many questions on this topic include:

And last but not least, do you think there will come a time in the not-so-distant future where your monthly report will consist of something along the lines of:

(The emojis used in this image are copyrighted by Slack.)

- WorkWave opens registration for virtual 2020 user conference
This article is tagged with ant, entomology, technology and posted in Ants, Crawling the Web