After being closed to the public for more than six years, Penn State’s Frost Entomological Museum has reopened with new and improved exhibits, storage facilities and research capacity. 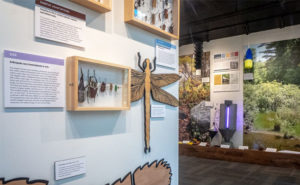 After closing in 2013 for renovations, the Frost Entomological Museum has reopened with expanded public space and new exhibits. PHOTO: NICK SLOFF, PENN STATE DEPARTMENT OF ENTOMOLOGY

The improvements were needed to ensure the preservation of more than a million specimens of insects and other arthropods — most of which were collected from the eastern United States — and to modernize the facility to fulfill its educational and research missions, says Dr. Andy Deans, the museum’s director and professor of entomology in Penn State’s College of Agricultural Sciences. The university was also home base for 2018 PMP Hall of Famer Dr. Bob Snetsinger.

“The museum stands, in part, as a resource to preserve, study, understand and celebrate the arthropod diversity of Pennsylvania,” Dr. Deans says. “We also exist to facilitate research and training and, as our mission statement says, ‘to foster a sense of curiosity about the natural world and to instill responsibility in all people to make our world a better place.'”

Observing its 50th anniversary this year, the Frost Entomological Museum was founded in 1969 and named in honor of Dr. Stuart Frost, who began his career in the Penn State Department of Entomology in 1922, retiring in 1957. Dr. Frost was responsible for the first major insect reference collection at the university and continued to add thousands of specimens to the collection well into his retirement. He died in 1980.

“The old cabinetry was susceptible to infiltration by museum pests, and we were maxed out with respect to storage,” Dr. Deans says. “At the time we closed, there were about 1,700 drawers in our cabinets, and only eight were empty. We had no room to grow.”

The public space also needed a major upgrade, he explains.

“Fluorescent lights had not been kind to the exhibits, which I don’t think had been updated for decades,” says Dr. Deans. “Our aesthetics and our understanding of how people effectively engage exhibits also have changed extensively since our founding in 1969. We were due for updates that could create a richer experience for visitors.”

Since the museum closed for renovations in 2013, Dr. Deans and museum staff — with support from the National Science Foundation — also have been digitizing the collections to expand accessibility and make the associated data available for researchers anywhere. 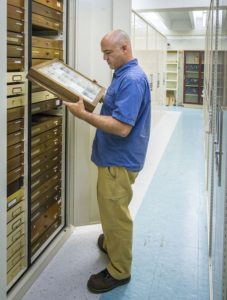 Dr. Andy Deans, professor of entomology and director of the Frost Entomological Museum, examines specimens from the museum’s collection of more than a million arthropods. PHOTO: NICK SLOFF, PENN STATE DEPARTMENT OF ENTOMOLOGY

“The research collection is our largest, with about 1 million specimens,” he says. “Our oldest specimen was collected in Paris, France, in 1859, and our oldest Pennsylvania specimen was collected in 1870 in Lancaster County. We have a good selection of species from major insect orders, and we add several thousands of new specimens annually — but we also have some strengths that make us stand out.”

Dr. Deans says the museum’s small outreach collection of several hundred specimens includes “our show-stoppers — the ‘oh mys’ — and the ‘insects of the day’ such as spotted lanternfly.” Many of these were collected by Dr. Frost during his sabbaticals in the tropics, mainly in Panama and Ecuador.

The teaching collection consists of several thousand specimens of arthropods that students handle, observe and sometimes dissect to learn about arthropod diversity.

“They may learn how to distinguish between bumble bees and carpenter bees, for example, or how to tell ticks from spiders,” Dr. Deans says. “I teach a class called ‘Insect Biodiversity and Evolution,’ which is a core class for entomology graduate students. They are the primary users of this collection.”

Pest management professionals looking to continue their education will find the collection — which has been vetted by taxonomic experts — a valuable reference source, explains Dr. Deans.

“We can verify the identity of emerging pests and train others (e.g., students) in how to recognize pests vs. non-pests,” he adds. “The Frost Entomological Museum has a public space that allows us to educate visitors on the value and diversity of native insects, the potential harm some invasive insects can have, the traits that make certain species more likely to be invasive or pestiferous, and ongoing research into effective control that’s happening at Penn State.”

The Frost Entomological Museum is located at 160 Curtin Road on Penn State’s University Park campus. The museum is open to the public from 10 a.m. to 4 p.m. Monday through Friday.