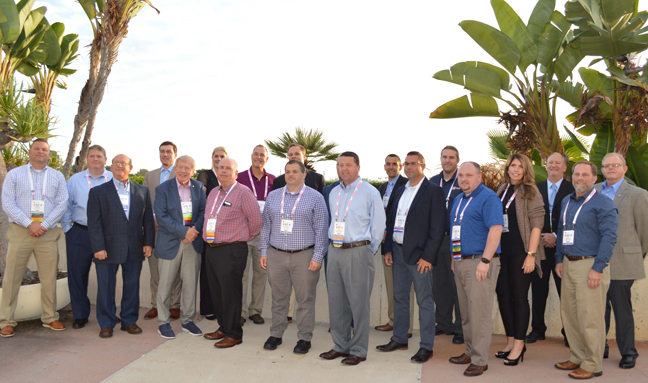 The National Pest Management Association recognized the State Policy Affairs Representatives (SPARS) who worked tirelessly with policymakers over the past year as advocates for the industry.
PHOTO: DIANE SOFRANEC

No bills passed in 2019 that would adversely affect the structural pest control industry. PMPs have SPARs and NPMA members to thank for delivering more than 9,500 grassroots messages to legislators. Eight NPMA members were recognized as “SPARs of the Year” during an informal reception at PestWorld 2019:

Rising to the challenges

“This year definitely was the toughest we’ve ever faced as an industry in the state legislatures,” says Jake Plevelich, director of Public Policy for the NPMA, who heads up the organization’s SPAR program. “We engaged in around 900 bills in 46 states. If you do the math, 92 percent of states introduced bills that would affect our industry.”

The regulatory issues to which SPARs are paying close attention include:

— Pesticide preemption, which prevents local governments from regulating pesticides. Plevelich considers this issue a “huge threat to our industry” because PMPs would have to comply with regulations that vary from town to town. Currently, 45 states have pesticide preemption bills.

This year, SPARs in Connecticut and Minnesota worked hard to defeat bills that would have repealed pesticide preemption in their states, he says. Florida, Massachusetts, New York and Wisconsin introduced bills to repeal their pesticide preemption laws, and allow local governments to regulate pesticides.

“If those bills become law, we’re talking job losses; industry growth is under imminent threat,” Plevelich says. “Pesticide preemption probably is the most important issue we should focus on and defend as an industry.”

— Pesticide bans are common, and neonicotinoids are the most frequent targets. In Maryland, Vermont and Connecticut, only professionals can use them. Illinois introduced a bill that would have allowed local governments to regulate neonicotinoids, repealing pesticide preemption for that substance only. To-date, Plevelich says, no bills have passed that would have negatively affected the pest control industry.

“We have PMPs going to their state capitals every single day whenever the state legislatures are in session,” he adds. “They’re testifying, defending our industry, defending the tools in our toolbox — and they are doing an excellent job.”

— Bed bug laws that benefit PMPs are in the works in several states. In 2016, Connecticut passed a law that requires, in most cases, landlords to hire PMPs if tenants have bed bugs. Colorado adopted similar legislation, and New Jersey may be next.

— Testing employees for marijuana is an issue, as some states are not making it easy. For instance, some consider tests to be discriminatory against medical marijuana patients. The NPMA is handling this issue on a state-by-state basis, Plevelich says. Some proposed laws have an exemption for safety-sensitive positions that works in the pest control industry’s favor.

— Occupational licensing reform laws are being proposed that could deregulate licensing pesticide applicators too much and move the licensing process from the state to the federal level. Chances are, the U.S. Environmental Protection Agency (EPA) would take up the task, and PMPs would be regulated from the nearest EPA regional office, which in most cases is not in the same state, among other problems. Typically, PMPs prefer to have their state lead agency oversee certification and licensing.

The NPMA’s position is that it’s a bad idea to raise the cost of protecting public health and property. Lawmakers in Utah pulled a proposed bill, thanks to the tenacious efforts of those in the pest control industry and other service industries.

— Wildlife and electronic trap monitoring. Technology designed to make nuisance wildlife control more efficient and profitable is available to PMPs, yet many don’t use it due to their states’ trap check requirements. Regulations that favor the use of technology have passed in Michigan, Virginia, Pennsylvania, Ohio and Illinois so far. The NPMA is working toward acceptance in all 50 states.

To help support or defend the regulatory issues affecting pest control in your state, contact your state association or Plevelich at jplevelich@pestworld.org.