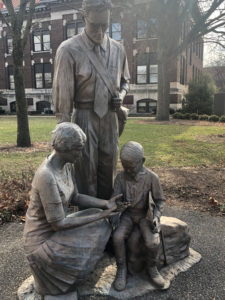 While I was at the Purdue Pest Management Conference earlier this month, the weather was so nice that I decided to see “The Entomologist” for myself.

The bronze sculpture was installed on Purdue University‘s main West Lafayette, Ind., campus in 2017, and is considered to be the only public sculpture in the United States devoted to the field of entomology. Only two other public sculptures in the world have that title. Both of them reside in France and are of the entomologist Jean-Henri Fabre.

Per our initial coverage of the sculpture, which was created by Savannah, Ga.-based artist Susie Chisholm:

The statue, which was made possible through funding from both alumni and supporters of the Entomology Department, depicts three individuals who have impacted the entomology industry with their work. The three are observing a tiger swallowtail butterfly, and are depicted at the age each of them would have been had they all met in 1924.

“The statue represents J.J. Davis, who was the second head of entomology at Purdue; John Osmun, the department head that followed J.J., and Rachel Carson, who wasn’t an entomologist, but her work relative to environmental issues had a great impact on research associated with entomology and how insects are managed today,” says [Dr. Tom] Turpin.

Both Prof. Davis and Dr. Osmun are PMP Hall of Famers — class of 2000 and 1997, respectively. While Carson, author of Silent Spring, is a polarizing figure in the professional pest management industry, no less than Dr. Osmun noted in the early 2000s that if not for her work, the industry would not be as professional as it is today.

Purdue graduate student Caydee Terrell was kind enough to escort me to “The Entomologist.” She watched as I snapped photos, and seemed to be as impressed as I was that Chisholm actually put in such details as a June bug on the back of Davis’ jacket, since that was his nickname. Many of us have seen the sculpture in a photo of its total glory, but what follow are some hidden gems in it that you might not have known about. Also, I must give a shout-out to 2019 PMP Hall of Famer Dave Mueller, BCE, who noted that an article on this very subject — unbeknownst to me when I took the photos — was written by Purdue’s own Drs. Turpin and Steve Yaninek in the Dec. 12 issue of American Entomologist. 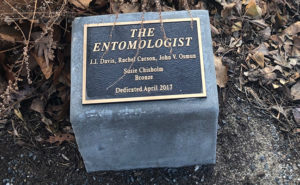 A nearby plaque identifies both the artist and the historical figures depicted in “The Entomologist.” PHOTO: HEATHER GOOCH 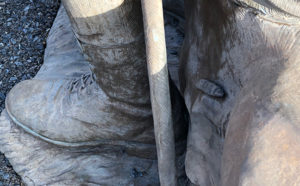 By young John Osmun’s foot is a caterpillar, which family lore says is what inspired his love of entomology “as a baby in a carriage.” PHOTO: HEATHER GOOCH 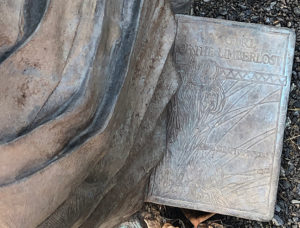 Rachel Carson was said to have been inspired as a young girl by reading the 1909 novel, “A Girl of the Limberlost” by Gene Stratton-Porter. PHOTO: HEATHER GOOCH 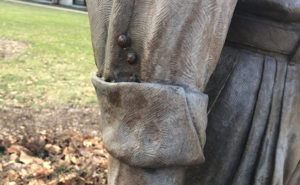 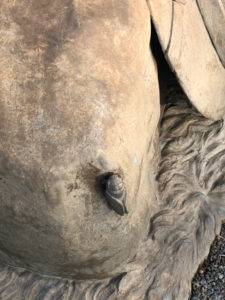 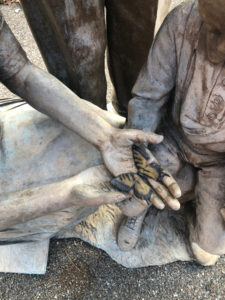 The only spot of color on the bronze sculpture is a butterfly, perhaps symbolic of the growth in breadth and depth of entomology because of these three figures. PHOTO: HEATHER GOOCH