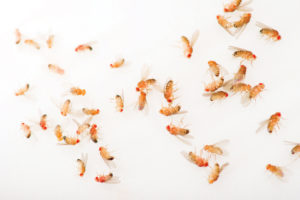 The University of California-Riverside’s Jules Bernstein sent us some interesting news this week:

New research from UC Riverside shows scientists may soon be able to prevent disease-spreading mosquitoes from maturing. Using the same gene-altering techniques, they may also be able help boost reproduction in beneficial bumblebees.

The research shows that, contrary to previous scientific belief, a hormone required for sexual maturity in insects cannot travel across a mass of cells separating the blood from the brain — unless it is aided by a transporter protein molecule.

“Before this finding, there had been a longstanding assumption that steroid hormones pass freely through the blood-brain barrier,” said Dr. Naoki Yamanaka, an assistant professor of entomology at UCR, who led the research. “We have shown that’s not so.”

The study, published this month in the journal Current Biology, details the effects on sexual maturity in fruit flies when the transporter protein is blocked.

Blocking the transporter not only prevented the steroid from entering the brain, it also permanently altered the flies’ behavior. When flies are in their infancy, or “maggot,” stage, they usually stay on or in a source of food.

Later, as they prepare to enter a more adult phase of life, they exhibit “wandering behavior,” in which they come out of their food to find a place to shed their outer body layer and transform into an adult fly.

When the transporter gene was blocked, Dr. Yamanaka said, the flies entered a median stage between infancy and adulthood, but never wandered out of their food, and died slowly afterward without ever reaching adulthood or reproducing.

“Our biggest motivation for this study was to challenge the prevailing assumption about free movement of steroids past the blood-brain barrier, by using fruit flies as a model species,” Dr. Yamanaka said. “In the long run, we’re interested in controlling the function of steroid hormone transporters to manipulate insect and potentially human behaviors.”

Currently, Dr. Yamanaka is examining whether altering genes in mosquitoes could have a similar effect. Since mosquitoes are vectors for numerous diseases, including Zika, West Nile Virus, malaria and Dengue fever, there is great potential for the findings to improve human health.

Conversely, there may be a way to alter the genes to manipulate reproduction in beneficial insects as well, in order to help them.

But wait a minute, isn’t that how insect growth regulators (IGRs), which have been on the market for decades, work? Not quite. In a follow-up email, Dr. Yamanaka clarified the difference:

Our most recent research specifically focused on the function of the steroid hormone transporter in the blood-brain barrier (BBB). When you block this transporter only in the BBB, it does not affect their overall growth, but it specifically alters brain development and function controlled by the steroid hormone, and hence the insects’ behavior. But (not surprisingly) as the normal function of the brain is required for normal insect growth, blocking the transporter only in the BBB can also disrupt insect development, just like normal IGRs.

One thing we’re interested in doing now, is to manipulate the BBB transporter only during their adult stage. Insects perform many important (i.e. ecologically and economically relevant) behaviors as adults, such as courtship, pollination, and blood feeding. We’re trying to figure out whether these adult-specific behaviors are controlled by the steroid hormone or not; and if they are, we will try to manipulate these adult-specific behaviors by targeting the BBB transporter only in the adults and see if we can control insect behaviors at will.

New research on pest insect behavior is always appreciated, and we’ll be following this development with interest.