ServicePro held its annual ServSuite University 2020 at the Westin Canal Hotel in New Orleans this week. From Feb. 18 through Feb. 20, users of the enterprise management software descended on New Orleans for the company’s user conference.

The company has grown significantly since ServicePro held its first ServSuite University 12 years ago, said ServicePro COO Andy Deering, who welcomed attendees to the event.

“We’re off to a good start,” he added. “We’re more excited than ever right now, with the things we’re doing.”

ServSuite started out with scheduling and billing capabilities and has evolved with routing and marketing functionality. In addition, it is available as a mobile app, making it possible for users to create custom forms and checklists on mobile devices, and remotely manage staff time off.

“We’re really excited about the direction we’re going and everything we are doing,” Deering said.

As in years past, ServSuite University featured educational sessions that give ServicePro users a hands-on look and new functionality. A Tech Room was open to all who want to meet with the company’s developers with questions and suggestions. A Workshop Room was set up so attendees could learn how to use the mobile device, as well as the Intelligent Routing and ServSales capabilities.

Deering encouraged attendees to get to know the ServicePro staff and team of developers, and build relationships with them.

“We want you to network, whether it’s with another pest management professional or a ServicePro staff member,” he said.

Throughout the event, an area was set up for sponsors and exhibitors that offer products and services to those in the pest management industry. They included Forshaw, J.T. Eaton, Univar Solutions and Zoecon.

Keynote speaker this year was Mandy Berkowitz, founder of The Image Marketing Group. She shared a seven-part marketing framework that would change how pest management professionals (PMPs) can communicate with customers, and even how they do business.

“Unless you are communicating how you can help your customers survive and thrive, they are not listening,” she said.

“The only reasons customers contact you is because they have a problem,” she said. “If you stop talking about your customer’s problems, they stop listening to you.”

She encouraged attendees to take a look at their company websites, and ask themselves if visitors can easily understand what problems they can solve for them. To illustrate her point, she asked attendees to check out their websites on their smartphones and rate factors such as responsive design, headline text, and the number and prominence of calls to action.

Because attendees all were ServSuite users, she encouraged them to update customer contact information with email addresses and cell phone numbers, as text and email marketing is an effective way to retain customers.

“We want to be where our customers are, and that’s on their mobile devices,” she said. 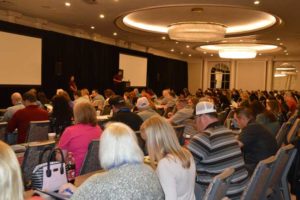 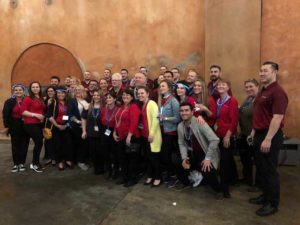 The ServicePro team gathered for a group shot during dinner as the first full day of ServSuite University 2020 came to a close. PHOTO: DIANE SOFRANEC/PMP 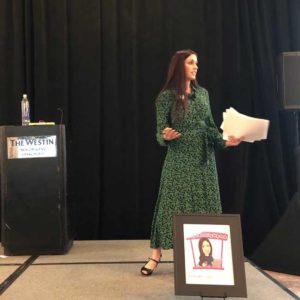 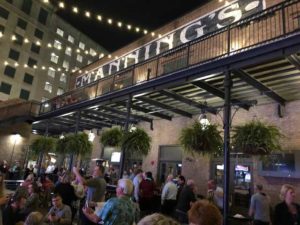 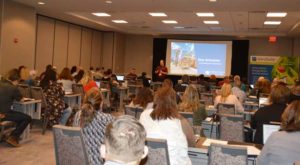 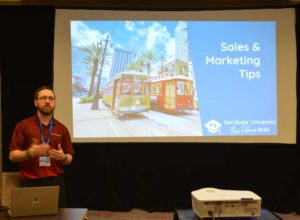 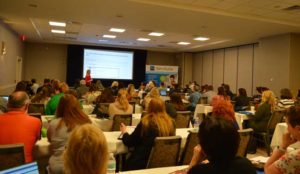 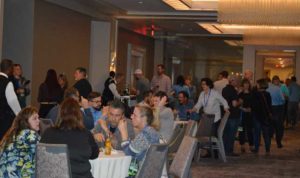 Before the first full day of ServSuite University, attendees were welcomed at a cocktail reception. PHOTO: DIANE SOFRANEC/PMP 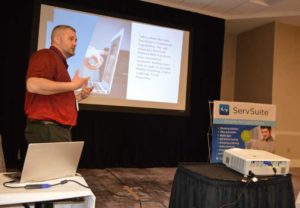 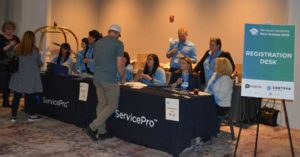 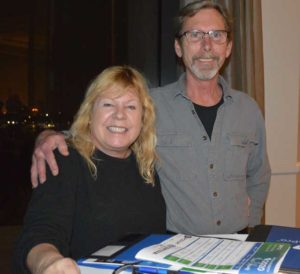 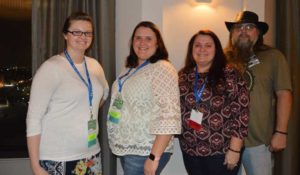 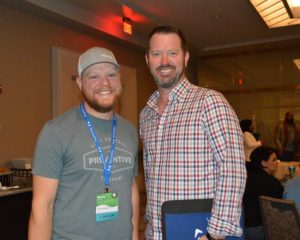 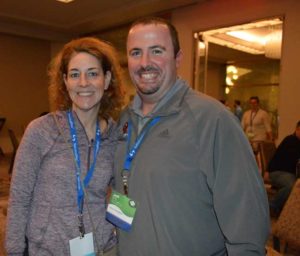 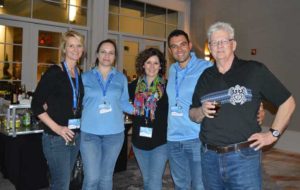 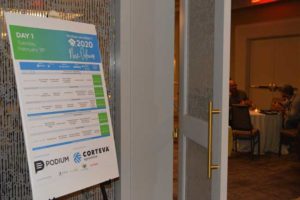 The schedule for the first day of ServicePro’s ServSuite University was on display at the entrance of the reception area. PHOTO: DIANE SOFRANEC/PMP 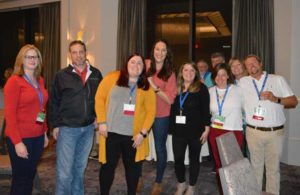 The crew from Northwest Exterminating and Rollins, was on hand at ServeSuite University 2020. PHOTO: DIANE SOFRANEC/PMP 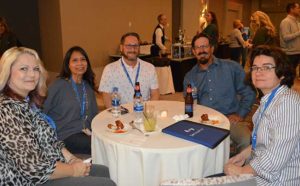