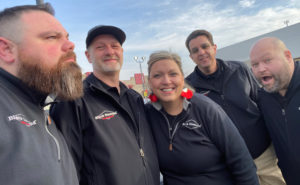 The branch opened on Feb. 17, and will serve residential and commercial clients in Indiana’s Vanderburgh and Warrick counties, and the following Kentucky counties: Union, Henderson, Hancock and Daviess. The location will provide general pest, termite, bed bug and wildlife control services.

Tony Davis, who began working as a tactical eradication agent in the company’s pest control division in 2018, is the new branch manager.

“I’ve learned a lot from Black Diamond, and I look forward to helping these new communities by offering them superior pest control services,” Davis said. “From what I’ve seen so far, this new branch will be a huge success.”

Davis said customers of the new branch can expect the same outstanding customer service that has helped Black Diamond expand to multiple branches and franchises throughout the United States since its founding in 1940. This is the second branch Black Diamond has opened so far in 2020, the first was in Elizabethtown, Ky., on Jan. 2.

“We’re always looking for opportunities to grow our company and our employees,” said Keith Duncan Jr., Black Diamond’s CEO. “All employees benefit from our above-industry-standard training program — add to that a record of hard work and a drive to succeed, and anyone who comes to work for Black Diamond has the opportunity to turn a job into a fulfilling career.”