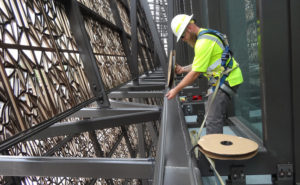 The National Museum of African American History & Culture is a Smithsonian Institution in Washington, D.C. It was established in 2003, but the building itself didn’t open until September 2016. And it is Roanoke, Va.-based Blue Ridge Wildlife & Pest Management’s responsibility to ensure there are no pest birds like pigeons or starlings around to damage buildings or interfere with visitors.

Jason Reger, CWCP, who is president of Blue Ridge as well as a past president of the National Wildlife Control Operators Association (NWCOA), notes that it all started with a federal bid during the construction process back in 2015.

“I gave them an option for an electric track system, then they asked for a design,” Reger recalls. “I hired a guy to create a CAD [computer-aided design] drawing of what I had in mind, and designed the system myself using 14 different systems.”

Reger is no stranger to federal government contract bids. For example, he counts among his clients a Veterans Administration (VA) hospital where he created an integrated wildlife management program — ensuring pond weeds and the wildlife populations were at their cultural carrying capacities.

This Smithsonian project is notable for a few reasons, including:

The bid goes out every year, and at press time, Reger was working on the next bid to keep the business. The Smithsonian also asked him for a quote to provide maintenance on the bird control systems and the outdoor lights that his firm installed for the electrical contractor on-site during the construction phase of the project. Although Roanoke is about 3.5 hours away from Washington, D.C., the scope of the work and the reputation-building it creates makes traveling worth the cost, he said.