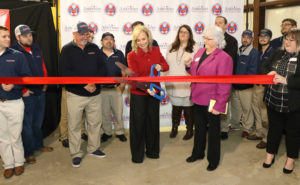 The company provides pest, termite, mosquito, and wildlife services to the Northeast Georgia region. It opened a service center in downtown Clayton in 2014, which has now moved to its permanent location on Old Hwy 441.

Those in attendance included employees and their families, community members and members of the Rabun County Chamber of Commerce. Following a ribbon cutting, the company hosted a Business After Hours event.

Juanita Shope, president of the Rabun County Chamber of Commerce, said, “American Pest Control has serviced Rabun County for many years and all of us at the Chamber are proud that they have always been a friend and loyal member of the Chamber.”

Headquartered in Athens, Ga., with eight locations throughout the state, the family-owned company celebrated its 48th birthday in November.

Rentokil has acquired Access Exterminating Service, expanding its presence in Southern California. The deal closed March 3 and terms were not disclosed.

Founded by Russ and Vicki Stribling, Access Exterminating Service began in 1998. The business grew quickly and by 2002, the company hired Roger Sonnenfeld to oversee termite service. A year later, Sonnenfeld became co-owner by purchasing Vicki’s interest of the company.

Russ was first exposed to pest control at age 11, when his friend’s dad would pay them to crawl under houses in Lake Arrowhead, Calif., and remove wood debris before a termite service. After obtaining his driver’s license, he got a job assist on a pest control contract for local shopping malls. Before long, Russ had his own route servicing shopping malls, restaurants, and single-family homes throughout Southern California. At age 21, he moved to Orange County and worked for a couple of pest control companies.

Many of the company’s customers have been loyal for more than 30 years. Russ and Roger will continue to assist Rentokil in the transition for both their customers and employees.

“It has been an honor to represent Russ, Roger and Access,” said Kemp Anderson, “The company has an amazing culture with a focus on people and integrity. Rentokil was great to work with as a buyer and they acquired a great company.”

Alley Cat provides rodent exclusion and proofing services to customers. The expansion improves internal and external company operations creating increased efficacy for the Bay Area at large, according to a statement from the company.

“We’re very transparent with our clients throughout every step of their projects, which they really appreciate,” said CEO Niv Goldman. “By clearly explaining their options, answering their questions and listening to their concerns, we’re able to help them make the right decisions for their homes. This transparency is also included in speaking out on our internal business expansions. It’s important for clients to know that the same quality service they receive in the East Bay will be delivered in San Francisco.”

Birmingham, Ala.-based Waynes Pest Control, an Anticimex company, is continuing its expansion into Tennessee. The company has acquired Priority Pest, which is headquartered in Mount Juliet, Tenn.

“Partnering with the team at Priority Pest further strengthens our strategic growth in Tennessee while doubling our footprint in the Nashville market specifically,” said President Eric Frye, according to Birmingham Business Journal. “The core values and operational synergies shared by our two companies will fuel our growth through a continued focus on providing world-class service to our customers – every time.”

Waynes achieved over $32 million in annual revenue in 2019. The company has more than 65,000 customers across Alabama, Tennessee and Mississippi.

Brownwood, Texas-based Jackie’s Pest Control has celebrated 20 years of service in the Brown County area. The Brownwood Area Chamber of Commerce held a ribbon cutting ceremony for the company on Feb. 25. The Chamber’s newest member, Jackie’s offers rodent, termite, and flea and tick control services, according to the Brownwood Bulletin.

“We are very excited to have the opportunity to provide services for Perimeter Pest Control clients as William transitions into retirement,” said Scott McNeely, president of McNeely Pest Control. “Perimeter Pest Control has delivered a high level of quality service to their customers and we look forward to continuing that tradition.”