Giant hornets: See something, say something 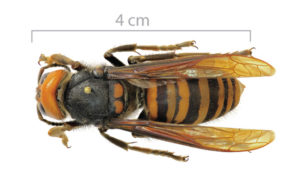 In December, the first Asian giant hornet (Vespa mandarinia) was sighted in the state of Washington. But researchers knew it wasn’t alone.

Because this invasive species regularly feasts on large insects, including native wasps and bees, a team comprised of researchers at the Washington State Department of Agriculture (WSDA) and Washington State University (WSU) has launched a program that asks the public to report any and all sighting of the hornet. They are hard to miss, considering they are the world’s largest hornet, clocking in at more than 2 inches in length. The sting’s neurotoxin can be lethal to humans if multiple stings are received — and each hornet is capable of multiple stings. The WSDA estimates it has nearly seven times the amount of venom as the domestic honey bee. And a group of 30 giant hornets can destroy a hive of 30,000 bees in less than four hours.

A WSU article notes that “regular beekeeping suits are poor protection against this hornet’s sting,” so the team has ordered special reinforced suits from China.

According to an article from WSU, it is assumed — but not verified — that the hornet arrived in North America through international cargo. “The Asian giant hornet’s life cycle begins in April, when queens emerge from hibernation, feed on plant sap and fruit, and look for an underground dens to build their nests. Once established, colonies grow and send out workers to find food and prey,” the article notes.

The team urges the public to download the “WA Invasives” smartphone app to easily record photos and details of any sightings. People can also give information by phone (800-443-6684), email (pestprogram@agr.wa.gov), or online at Agr.wa.gov/hornets.