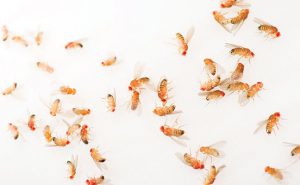 In the May 8 edition of Science Advances, researchers from the Washington University School of Medicine in St. Louis, Mo., hypothesize that sleep schedules may have evolved in animals as they dealt with new and challenging situations.

Fruit flies (Drosophila spp.), also known as vinegar flies, are often used in evolutionary studies such as these because of their ability to create several generations in a short timeframe. So while these scientists were more focused on extrapolating the data and trying to figure out how it relates to other animals — up to and including humans and their desire to sleep when faced with stress — just the fruit flies’ reaction could potentially be of use to the professional pest control industry.

As an article on Phys.org notes, “Fruit flies’ sleep looks a lot like people’s. Baby flies need a lot of sleep, but as they get older, their need for sleep diminishes. Flies become more alert with caffeine and drowsier with antihistamines. And if you keep a fly awake one day, it will sleep more the next.”

For the study, the researchers took away the ability to fly, and observed how the flies reacted. Per Phys.org:

Baby flies must expand their wings in the first half hour or so after emerging from pupal cases, or their wings will not develop properly. The researchers placed some newly emerged flies in tiny containers so they could not expand their wings, and they genetically modified other flies so that the insects’ wings failed to expand. Both scenarios rendered the young flies permanently flightless. The researchers also grounded older flies by disabling their wings. In all cases, faced with the inability to fly, the animals slept more than usual.

In subsequent experiments, the researchers traced the neurological circuit that signals to the brain that the wings aren’t functioning and triggers the impulse to sleep more.

Future experiments will focus on whether increased sleep helps the flightless flies survive. While again, the study’s authors hope to gain insight into human sleep disorders, we’re rooting for an entomology team to take up the mantle and explore the benefits of having fruit flies sleep — instead of mate.