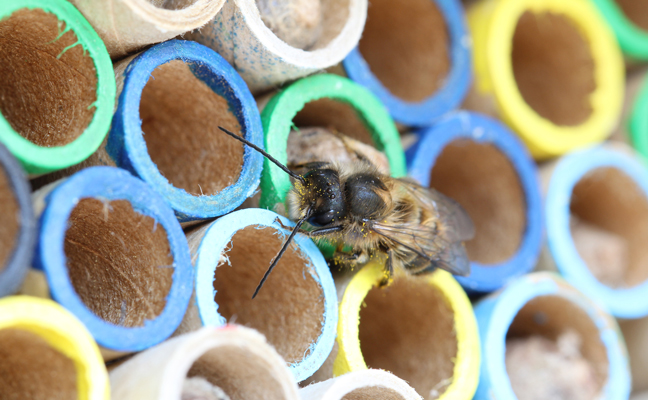 The team at the Agricultural Research Service (ARS) Bee Disease Diagnostic Service in Beltsville, Md., were recently called upon to  solve a mystery — uncovering new pollinator behavior in the process.

According to a news release, a state apiary inspector found unusual insect cocoons inside cells of a beekeeper’s honey bee colony in Ohio. She sent two pieces of comb to the ARS team for possible identification, over concern that the cocoons could represent a threat to the honey bees.

The cocoons were brown, about 3/8 inches long, and had a hard black spot resembling a nipple at the end. They were strongly attached to the cells, with bee wax on both sides of the comb. The water-resistant cocoons were wrapped in a thin layer of brown silky threads; they were hard to cut open.

The team was able to identify the cocoons as those from the horned-face bee (Osmia cornifrons). This solitary mason bee is native to northern Asia, but has been in the U.S. since the 1970s. It is more docile than honey bees or bumble bees.

Until now, however, horned-face bees were never reported as cocooning in honey bee colonies. About 40 cocoons were found in the colony, which researchers say is more than one female bee can produce alone. Thus, this wasn’t the act of a single confused horned-face bee. But the “subletting” does not seem to have had a negative effect on the honey bee colony. They published their findings in the April 14, 2020 edition of Journal of Apicultural Research.

The ARS team says it’s important to stay vigilant for any unusual activities in honey bee comb. This finding will also help researchers explore the possibility that horned-face bees will reproduce in other unusual materials.