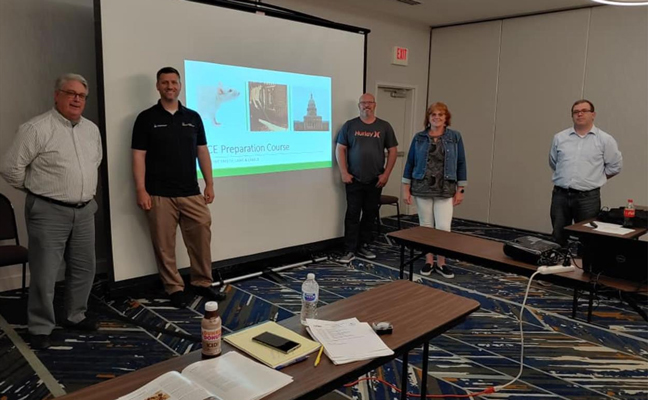 In a news release, VPMA President Rhonda Elmore explained that “the ACE designation is an honor earned by technicians that recognizes their years of experience and accumulated knowledge. It sets them apart as an elite group of pest management problem solvers.”

The VPMA program is named after the late Jeff Johnson, who earned his ACE in July 2010 and made it his priority as he began his term as VPMA president that year to double the number of ACEs in Virginia. During his two-year term, VPMA helped 16 pest management professionals (PMPs) earn their ACE designations through the VPMA Prep Course and proctored exams, far surpassing his goal.

The ACE program is designed to benefit practicing PMPs. You do not need an advanced degree to participate, just a solid grasp of the practical aspects of applied entomology. To be eligible to apply for the ACE program, you must hold a current pesticide applicators’ license issued in the U.S., have a minimum of seven years of verifiable pest management experience, and must take and pass a test of knowledge of structural pest control. Learn more at EntoCert.org/ace-certification.

VPMA holds the Jeffrey M. Johnson Memorial ACE Prep Course and Exam each spring. The course is taught by PMP Hall of Famer Dr. Dini Miller of Virginia Tech (Class of 2019) and David Moore, BCE, Dodson Pest Control. They review each of the elements that may be covered on the exam to reinforce  knowledge and gives participants the opportunity to clarify information. VPMA recommends individuals begin self-study approximately 6 months before taking the ACE exam. The VPMA Prep course can be a good way to kick off your preparation, but is usually taken as a final refresher just prior to taking the exam. Individuals must make application to ESA 30 days prior to taking the exam.

The VPMA is a professional organization of approximately 225 member companies employing more than 3,000 people throughout the Old Dominion State, and generating more than $280 million in annual revenues. It is dedicated to promoting the interests and general welfare of the pest management industry and to supporting scientific, technical and business research in the areas of pest management.