To help protect those in the United States from diseases transmitted by ticks, mosquitoes, fleas and other blood-feeding vectors, the Centers for Disease Control and Prevention (CDC) released a National Public Health Framework for the Prevention and Control of Vector-Borne Diseases in Humans. 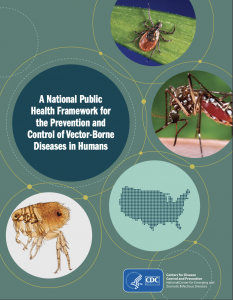 The Framework was developed as a result of the Kay Hagan Tick Act, which was signed into law in December 2019. It is named for Senator Kay Hagan, who died Oct. 28, 2019, from complications of Powassan virus, a tick-borne disease.

The Tick Act called for a three-pronged approach to address the public health threat, and requiring the U.S. Department of Health and Human Services to develop a national strategy is one of them.

The Framework details the federal government’s priorities to engage stakeholders that include associations of entomological and vector control professionals, as well as industry and associations to help fight vector borne disease in the United States.

It states the problem is that everyone in the United States is at risk; more cases of tick-borne and mosquito-borne cases are being reported to the CDC than ever before; more of the pathogens that cause disease are being identified; and the geographic location of mosquitoes, ticks and fleas is expanding in the United States thereby putting more people are at risk.

The National Public Health Framework for the Prevention and Control of Vector-Borne Diseases in Humans is available here in its entirety.