The morning after the industry fraternity’s virtual “Raise the Bar” event, Pi Chi Omega held its membership meeting over Zoom on Wednesday morning, shortly before the National Pest Management Association’s (NPMA’s) PestWorld 2020 virtual convention and trade show got under way. Fifty-two participants were on the call.

Sheperdigian urged Pi Chi Omega members to stop by the virtual booth and consider making a testimonial video, as “your message will speak to others as only you can.” He then showed his own as an example.

In his report, Finance Committee Chair Russ Ives noted that the fraternity is in good shape money-wise. In fact, funds have increased by nearly 8 percent from last year.

Glen Ramsey presented a report on behalf of Membership Committee Chair Dennis Judy. The upshots is that membership is more than 400 strong, but the committee is looking to get anyone behind in dues back on track.

Ramsey also presented a slate of potential nominees, all of whom were unanimously voted in.  Active members now include Stephen Vantassel, ACE, a PMP magazine editorial board member; Dr. Roberto Pereira; and Dr. Benjamin Hottel.

In addition, Dr. Michael Merchant, recently retired from Texas A&M University, was unanimously voted in as an honorary member. Upon acceptance, he told attendees “This is a real honor for me. I feel pretty humbled because Pi Chi Omega has done a whole lot for the industry. I look forward to working with y’all in the future.”

Stephanie Hill presented on behalf of Scholarship Chair Desiree Straubinger. Hill announced the winners, and wrapped up with a reminder that donations are always welcomed: “Most of us have known somebody who received a scholarship or received one ourselves. Think about that feeling when you received, or watched a friend or family member receive that scholarship… Let’s think about the money we didn’t spend traveling this year. Could we give it back to the fund?

“Last night, we raised $475 toward the fund,” she added. “I challenge our membership to triple or quadruple that. It makes such a difference in these students’ lives… to give everyone that good feeling.” 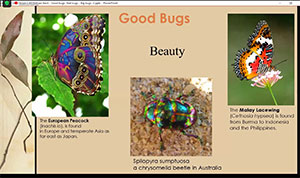 An example of a slide from the Junior Entomologist program, shown during the Pi Chi Omega membership meeting. IMAGE: PMP STAFF

Pi Chi Omega Gives Back Chair Tom Mueller reported that the first program the committee tackled this year was Junior Entomologist. This consists of a PowerPoint presentation of 24 slides, with notes, so that PMPs could go into their communities and schools, and raise awareness and interest about pest control as a career.

“Our next steps are to get it up on the Pi Chi Omega website and make it accessible,” Mueller said.

Pi Chi Omega Awards Committee Chair Karen Furgiele introduced this year’s awards program, which differs from past years in that the two winners were recorded on Zoom calls receiving accolades from their presenters and opening up the mailed award on camera.

MGK’s Dr. Cassie Krejci presented the Award of Generosity to James Miller of Trécé, noting in part how not only was he very welcoming to her when she joined Pi Chi Omega, but “I’ve seen you volunteer at many Pi Chi events … and how you generate excitement for the organization. We now sell fundraising raffle tickets at ‘James Miller arm-length.’ Giving your time and effort … has helped us continue to grow our organization.”

Dr. Krejci reported that during the committee’s discussion, Immediate Past President Dale Baker summed up Miller’s nomination in typical, well, Dale Baker fashion: “I would eat live bees for James Miller. It would be my honor.”

Dr. Krejci then “presented” the award from her Zoom window “to” Miller’s Zoom window, whereupon he teased, “Wow, the U.S. Mail is fast!”

In both videotaped and then later in-meeting comments, Miller thanked the organization and opined “I think there are a lot more people more deserving of this award… but I’m gonna keep doing what I do, and I think this award is pretty cool.”

“This man taught me everything I know,” she said in her videotaped introduction. “I can think of no one more worthy… and I would think all 83 of his former students… would say the same.” Before bestowing the Award of Achievement on Dr. Koehler, Dr. Miller introduced his lab colleague (and new Pi Chi Omega member), Dr. Roberto Pereira, who spoke of Dr. Koehler’s navy entomologist background; and Rebecca Baldwin, who went from Dr. Koehler’s student in the early 2000s to being his departmental colleague at the University of Florida.

Upon unwrapping the packaged award, Dr. Koehler said what a “huge honor” it was to receive the accolades, but noted that he felt it was the great students he had worked with over the years that had burnished his reputation.

Live at the meeting, Dr. Koehler remarked how both his and Miller’s award were beautiful butterflies in glass cases. He noted that his was Ornithoptera goliath, the goliath birdwing, which is the second-largest butterfly in the world. It was, he said, “a wonderful specimen and a wonderful award to receive.”

Nominating Chair and Immediate Past President Dale Baker opened the floor for any additional nominations beyond the two on the ballot. There were none, and the votes were cast unanimously for both Tom Mueller and Desiree Straubinger to renew their terms on the board.

Sheperdigian wrapped the meeting up before adjourning by noting that he and the board would be very interested in member feedback, positive or otherwise, about both the Raise the Bar and the membership meeting virtual events. The plan is to do both events virtually again in January in time for the virtual Purdue Conference.

Follow along with more of PMP’s PestWorld 2020 coverage here.

Preview of Bayer features at 2021 PestWorld