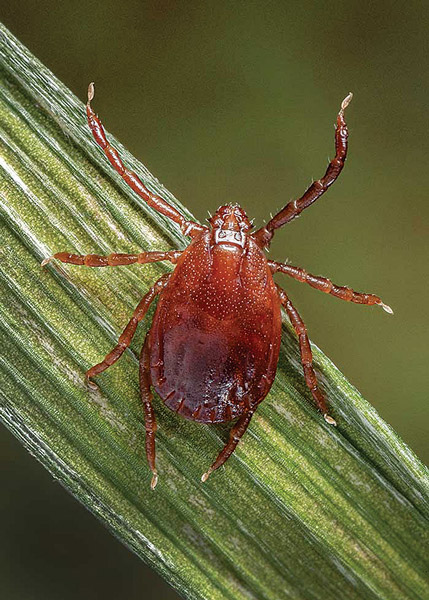 An adult female Asian longhorned tick hangs out on a blade of grass. PHOTO: CDC

Urban pest management is largely the practice of controlling introduced species — and it appears another has come to town.

There are very few major urban pests that are native to North America. If it weren’t for all the introduced species, we would not have an industry.

Now we have a new tick in town, and this one has some nasty habits. Let’s meet Haemaphysalis longicornis, the Asian longhorn tick.

Named for a protrusion of the sides of its mouthparts, this tick originated in eastern Asia. About 100 years ago, it became established in Australia and New Zealand. Individual Asian longhorn ticks had been stopped at quarantine stations in the U.S., but until 2017, they had not been identified from inside the U.S. That was the year a woman from New Jersey found several hundred of them on her pet Icelandic sheep and took them to the local county health department. As of 2020, they have spread west into 14 states.

Asian longhorn ticks are small, less than 1/8 of an inch, and differ from common ticks in several ways. Most notably, they reproduce parthenogenetically. That means females can lay viable eggs without mating. One female can produce about 2,000 eggs, which are all females who can themselves produce about 2,000 eggs. If they all survived, one female Asian longhorn tick in two generations could potentially produce 4 million offspring.

The freshly hatched ticks, called larvae, can be found waiting for a host in groups at the ends of grass stems or other projecting vegetation, waiting for a host. When someone walks by, they don’t get a tick on them. They get dozens of ticks on them! But just because you get a lot of ticks on you doesn’t mean they’re Asian longhorn ticks. You can pick up dozens of lone star ticks (Amblyomma americanum) in a short time, but you won’t find them all sharing a stem.

These ticks are known to transmit a number of diseases, but more research will be needed to determine what we can expect here. Diseases aside, they can be so numerous on livestock that they cause death by exsanguination, or blood loss. This has occurred here in the U.S. already.

Unfortunately, the untrained eye will have a difficult time separating them from some of our more common ticks, but there are indications you may notice that can tip you off. If you find an animal heavily infested with dozens (hundreds?) of small ticks, you should take specimens and have them identified.

With no need for males, these ticks can spread quickly. They could potentially spread through much of the eastern U.S. and parts of the Pacific Northwest. But as with all introduced species, only time will tell how this will turn out.