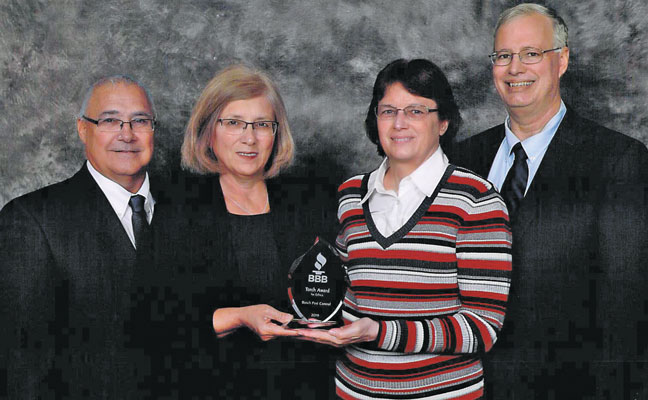 Pictured from left are LaMar and Kenlyn Miller, and Karol and Jeff Cochran. They are celebrating a 2019 award bestowed on Bosch Pest Control from the local Better Business Bureau. PHOTO COURTESY OF JEFF COCHRAN.

Editor’s Note: We were saddened to learn that the day after this post published, on Nov. 14, Kenlyn Miller also passed away after an extended illness.

Jeff Cochran got into the pest control industry back in 1978 as a summer job. His family went to the same church as the Bosch family. Bob Bosch, who had founded Bosch Pest Control, Muscatine, Iowa, in 1949, welcomed Cochran as he worked his way up in their business. Bob’s daughter and son-in-law, Amy and Mike Rudolph, took over the company upon Bob’s retirement in the late 1980s. But in 2008, they decided to sell — and Cochran and his co-worker and good friend, LaMar Miller, jumped at the opportunity to purchase it. Wives Karol Cochran and Kenlyn Miller are also partners in the business, with Karol doing payroll and Kenlyn serving as office manager of the eight-employee company.

Jeff and LaMar had the perfect balance of leadership. “LaMar generally handled the orders and equipment maintenance,” Jeff says. “I would take care of emergency calls with our commercial customers. LaMar also addressed most of the farm accounts, whether it would be treating grain bins or doing fumigation.”

All that changed Sept. 12, when LaMar passed away suddenly at age 62.

“We are still in shock and trying to fill in the gaps,” Jeff admits. But he also knows that LaMar would want the business to go on. He, Karol and Kenlyn are trying to do just that, while honoring LaMar’s memory.

“Our customers are also our family,” Jeff notes. “We work hard at taking care of all of our customers’ needs, big or small, in a timely fashion. We spend a lot of time at our team meetings talking about ways that we can better serve our customers.”

Looking ahead, Jeff says he is proud of the foundation first laid by Robert Bosch, and then by LaMar and himself. A third generation of Millers and Cochrans have worked on and off over the years, and his oldest son is currently an accountant for the company.

“As for the state of the industry, we are actually excited about the future of pest control,” Jeff concludes. “We feel that there is always room for growth for the honest companies that put their customers first.”