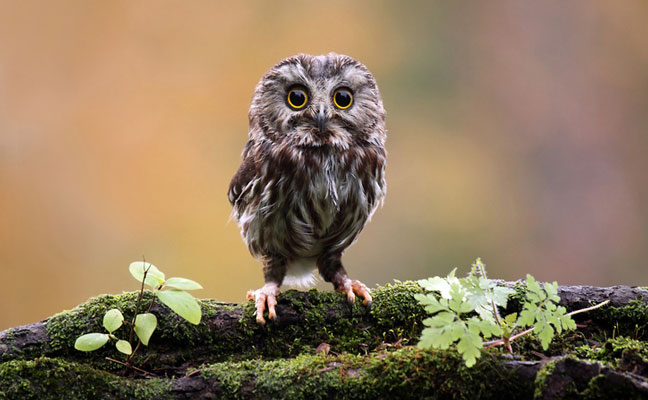 Once Rockefeller has had a chance to rest and gain weight, he’ll look more like this saw-whet owl. PHOTO: MLORENZPHOTOGRAPHY/MOMENT/GETTY IMAGES

Choose a live tree for the holidays and you just might encounter some not-so-festive hitchhikers such as spiders, moths or mites. Inspecting your choice carefully before bringing it indoors can help avoid an infestation.

This year, a worker who was helping set up the iconic 75-foot-tall live tree in New York City’s Rockefeller Center discovered among its branches an adult saw-whet owl (Aegolius acadicus), one of the smallest breeds.

The male owl was hungry and dehydrated and taken to the Ravensbeard Wildlife Center in Saugerties, N.Y., according to an AP News report.

He survived a 200-mile journey from Oneonta to Manhattan, N.Y., tucked inside the protective plastic wrapping on the tree.

Ravensbeard Wildlife Center Director and Founder Ellen Kalish said a veterinarian examined the owl and declared him healthy. He will be released into the wild over the weekend, according to AP News.

“He’s had a buffet of all-you-can-eat mice, so he’s ready to go,” she told AP News about the raptor now named Rockefeller.

Owls excel at pest control, as they favor voles, mice and other small mammals. Their sharp talons and curved bills enable them to hunt, kill and eat the animals on which they prey.

The stowaway has been a welcome distraction from the tree itself, which has been (unfavorably) compared to how this year has been for most Americans. Search social media, and you will find no shortage of critiques and comedic gems about the tree, like this one: “In true 2020 form, the Rockefeller Center Christmas tree looks like it tried to cut its own hair.”

It may look like Charlie Brown picked it out, but soon decorations and lights will be added, and on Dec. 2, it will be lit up for the first time.

This article is tagged with Ravensbeard Wildlife Center, Rockefeller Center and posted in Crawling the Web