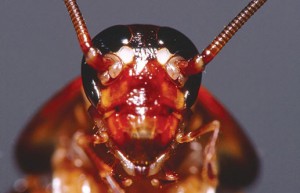 Ah, the American cockroach — the sewer-loving foe of many pest management pros. Photo courtesy of, and copyrighted by, Gene White, pmimages@earthlink.net

The next time an American cockroach (Periplaneta americana) account has you beating your head against the wall, consider two things:

According to a news release recently issued by the Washington, D.C.-based American Chemical Society (ACS), neuropeptides produced by American cockroaches could “someday be targeted by new, more selective and effective pesticides.” The resulting paper was published in ACS’ Journal of Proteome Research, October 2020. The study was funded in part by the National Natural Science Foundation of China, the Department of Science and Technology in Guangdong Province, and Shenzhen Science and Technology Program.

Neuropeptides are defined as “small proteins produced by neurons or endocrine cells that send messages to other cells. In insects, neuropeptides often act as neurotransmitters, hormones or growth factors, influencing an organism’s development, growth, metabolism, behavior and reproduction. Therefore, disrupting these processes by targeting neuropeptides or their receptors is a potential new approach to pest control.”

Just as insect growth regulators (IGRs) and juvenile hormones have had a positive impact in controlling pest populations by targeting immature stages, these new findings seem to imply that science could eventually develop products that affect adult stages as well. In this particular study, researchers noted that adult male American cockroaches had the most neuropeptides. In addition, “one neuropeptide, called sNPF, that was more highly expressed in females appeared to stimulate feeding behaviors, the researchers say, so it could be an attractive target for pest control measures.”

In the meantime, our industry needs to be patient and keep the faith — and keep using the many already-very-good tools we have on the market. Meanwhile, our team will keep an eye on this topic for further research and development news. And we can all look forward to the time when someday, somewhere, researchers tackle the gene mapping to do something similar with the American cockroach’s pervasive cousin, Blattella germanica!