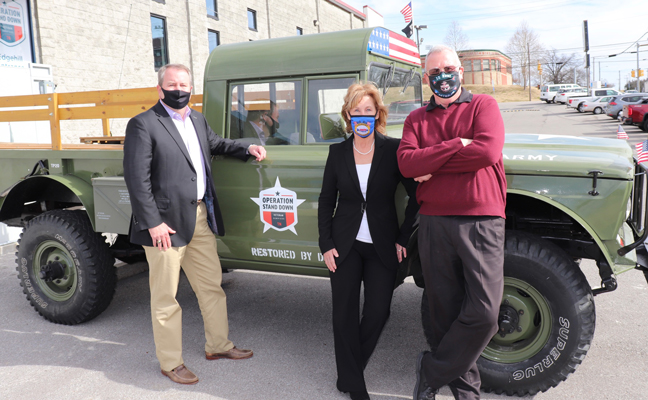 From left, FMC’s Tom Wharton, Arrow Exterminators’ Marie Horner, and Catchmaster’s Dr. Stan Cope stand in front of a truck used in military parades that is parked in front of the new veterans’ apartment complex. The trio represented the PestVets group and delivered the donation check. PHOTO: ARROW EXTERMINATORS

Lately, I seem to be asked a lot about what it is like to be a woman in the pest control industry. For me, that is a very difficult question to answer. I’ve never thought about my challenges or victories through the filter of my gender. I grew up believing that if you worked hard enough, you would achieve your goal — and so, I work hard at everything I do.

As I’ve gotten older, though, I’ve realized that hard work doesn’t always get you where you want to go. Timing, being in the right place at the right time, and developing relationships can and do open doors to opportunities. When you are in the minority, it can be easy to get lost in the crowd, be overlooked, and underappreciated. There are times when we need a united voice to be heard. There are times when we need to be the voice. (Editor’s Note: Wil-Kil Pest Control’s Marsann McCant explores this idea even further in our February issue’s “5 Questions” feature, from the perspective of a Black female military veteran.)

Statistics state that about 5 percent of pest control workers are female, and that 9 percent of U.S. military veterans are women. Maybe, the similarity in structure and independence between being in the military and now the pest control industry, is why I’ve been successful and why I’m so passionate about connecting pest control companies and veterans. To be the voice that says look at the veteran community when you have openings in your organization. To be the voice that tells veterans to look at the pest control industry as a career because it will feel like coming home.

I recently had the opportunity to do just that. As the chair of the National Pest Management Association’s PestVets group, sponsored by FMC, I had the privilege of being part of a team that delivered a $10,000 check to Operation Stand Down Tennessee (OSD) in Nashville, Tenn. OSD provides and connects veterans and their families with comprehensive resources focused on transition, employment, housing, benefits, peer engagement, volunteerism, and connection to the community.

The donation was made possible through the generous contributions from the pest control industry to the fundraiser that PestVets held as their day of service during the virtual 2020 PestWorld convention.  The money is being used to provide the necessary move-in essentials and furniture for veterans that are moving into a brand-new veteran apartment complex that OSD was instrumental in getting built.

Visiting the OSD campus and taking a tour of the apartment complex was such an emotional experience for me and one that I will not forget. And the best part of all was that we were able to connect a pest control company owner in Nashville with OSD — and they just hired a veteran to join their company!

As a female veteran in the pest control industry, I am thankful every day that I work for a company who values their employees and continues to invest in us and in the industry.

HORNER is VP of Government Affairs & Industry Stewardship at Arrow Exterminators, Atlanta, Ga. She may be reached at mhorner@arrowexterminators.com.