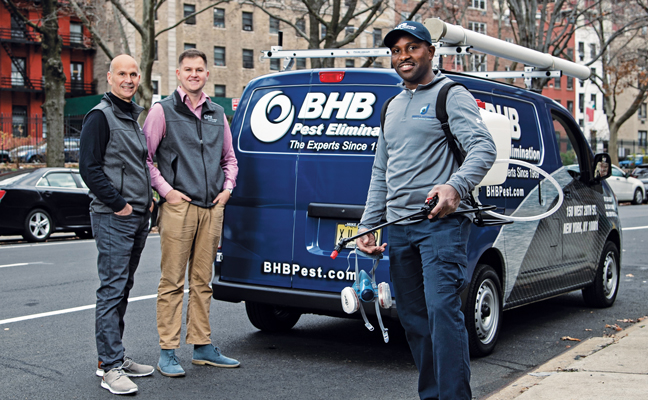 From left, Michael Broder, Zack Broder and Ron Lane say they are optimistic about business in 2021. PHOTO: ROB TANNENBAUM PHOTOGRAPHY

Michael Broder can clearly recall just how the COVID-19 pandemic turned his business model upside down.

Based in the Chelsea neighborhood of New York, N.Y., BHB Pest Elimination was founded by Broder’s father, Ben, in 1969. In recent years, it was blooming as a commercial-focused firm, generating about $3.5 million in annual revenue. Broder, who is a Pest Management Professional (PMP) Editorial Advisory Board member and PMP’s PestTalk “Run Your Business” columnist, had even been able to expand to a second office in 2018.

In mid-February 2020, however, the winds of change began to blow.

“As news was spreading of COVID-19 cases coming out of China, I knew it was inevitable it would get to us, especially in New York City,” Broder remembers. “But I was naïve in believing it was just going to be like a bad flu season.”

In early March, Broder was among the attendees of the 2020 PMP Growth Summit in Orlando, Fla.

“In the airport and on the plane, I had my first inklings that this was something different,” he says. “I was never a germophobe, but everyone seemed contagious to me. A person coughed, and I moved away from him. I used disinfectant wipes all over my seat on the airplane. I returned home, and within a week, news of lockdowns throughout Italy and Europe spread. Still, I never believed it would happen here, because ‘nothing stops New York’! How wrong I was.”

Within days, food and hospitality businesses, which comprised about 60 percent of BHB’s accounts, were halted by the city-wide lockdown. This immediately affected its top and bottom lines. Broder admits to being terrified, but he knew he had to take swift action to keep BHB afloat.

“We reached out to our customers, and as expected, more than half of our restaurant accounts requested to suspend or reduce services. By mid-March, literally the first week into the shutdowns, we were forced to make the difficult decision to lay off and/or furlough technicians and office staff,” he says.

To continue to control costs, Broder reached out to his landlord to pare down his two-office lease to just one. “I knew the pandemic was not going to go away quickly,” he admits. 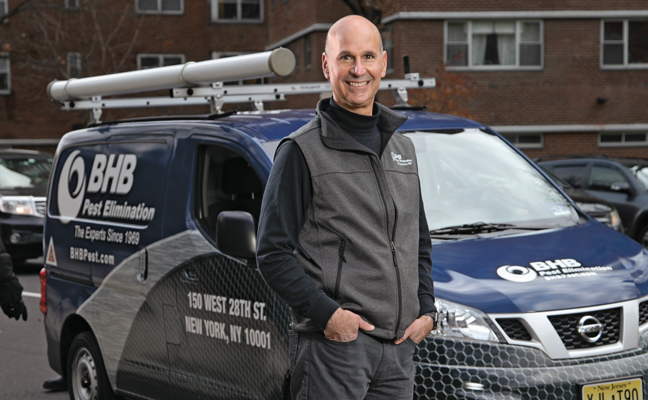 Michael Broder has worked at BHB since he was 12 years old. PHOTO: ROB TANNENBAUM PHOTOGRAPHY

“April and May were some of the most frightening, stressful periods for us,” says Broder. “Our cash flow ground to a halt. So many of our customers, even those that remained open, were afraid to pay anything. We all shared the same fears and uncertainty.”

To add to the stress, a shortage in personal protective equipment (PPE) in those early months emerged. Broder’s wife, Linda, was able to supply handmade bandanna masks to keep the crew going. But the going was tough, Broder says. “The city was like a war zone. There were empty streets, boarded windows. You felt like every person you saw was contagious.”

A LIFELINE, THEN A SILVER LINING

Broder says the U.S. government’s Paycheck Protection Program (PPP), which debuted in late April, was the first glimmer of hope. “It gave our company financial stability to know we could go on, and did the same for our customers, who began to reopen and clear their balances,” he says. “We felt we hit bottom and were slowly creeping back up.”

Outdoor dining as spring gave way to summer “gave the city a burst of life, that fortunately continued into the fall,” he adds. It was around that time that Broder also was struck by inspiration.

“For some reason, my instincts told me this was a unique opportunity to really strengthen our business. We looked at it like pruning a tree: Cut it back so it can grow stronger,” he says. “As 2020 began, one of our main goals was to increase our residential business.”

To that end, BHB changed its scheduling software and revamped its website. In addition, Broder says, “the most important step we took  was reabsorbing our New Jersey/Pennsylvania branch. While both locations had continued to grow, we realized we are so much stronger together than apart.”

Among all of this “pruning,” Broder says, there was also the opportunity for new growth. As soon as restaurant and hospitality customers began to stabilize somewhat, several of them began asking him about disinfecting services.

“We had informally offered disinfecting services with our bird and rodent services, so we decided to simply extend and formalize these services on a broader basis,” he explains. “Starting something new was a pleasing distraction. Creating the name, logo, website and service protocols really helped our sanity, and gave us something fun amid all of the terrifying things going on around us.”

Not that it was a bump-free ride, Broder notes. Insurance coverage was a huge hurdle, but BHB’s broker helped them around it by advising BHB to stay a separate company with separate policies. Thus, Disinfex Services was born. And just like getting masks and other PPE for pest control technicians, getting the right disinfectant equipment took some doing.

In hindsight, Broder says, he would have marketed the services differently from the onset.

“We began primarily just marketing to our existing customer base. But many of our customers, particularly restaurants and hotels, were still closed and had no need for these services,” he says. “Instead, I would have marketed outside of our customer base to retail and health sectors that really needed the services.”

Broder acknowledges that even as this interview is conducted in late January, and vaccines are starting to roll out, the coronavirus pandemic continues. But as he looks ahead to a hopefully post-pandemic world later this year, he plans to retain some of the business practices he implemented, such as letting customer service representatives (CSRs) work remotely.

Broder’s son, Zack, a college junior who has been assisting his dad wherever he can, agrees. “COVID-19 has significantly changed the business practices of BHB,” Zack notes. “We did everything we could to adapt to the socially distant way of living. We automated our phone lines so if no one was in the office, ‘BHB’ still answers the phone to collect all of the information the caller has and automatically set up appointments. This is definitely a tool that will be useful moving forward.”

His father reports that being able to send a call to anyone, anywhere, “also allows us to have smaller offices, which is essential with high real estate costs in New York City.”

Because most of its technicians are on walking routes, without vehicles, BHB is experimenting with having a service manager who can meet technicians in the field with supplies, rather than having them trickle into the office. On-site quality control checks can increase as a result.

Read more: Others’ input can strengthen your business

Growth opportunities over the next five years