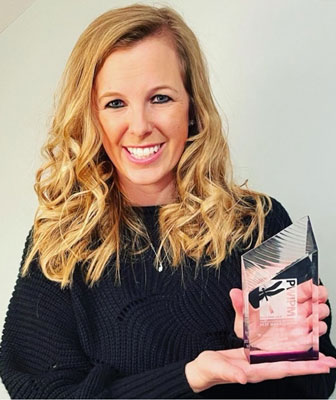 On March 2, the Professional Women in Pest Management’s New England chapter (PWIPM of NE) announced the winner of its Second Annual Women of Excellence Award: Courtney Carace, ACE, who is COO of Plaistow, N.H.-based Pest-End Inc. Carace has worked for Pest-End since 2004, and has held various positions ranging from office administration to technical, management and executive posts.

Carace obtained her National Entomology Scent Detection Canine Association certification in 2010 and was a bed bug canine handler for several years for Pest-End. She is also a licensed and certified pest control operation in Massachusetts, New Hampshire and Maine. More recently, she was recognized as having the highest score of the day for the Associate Certified Entomologist (ACE) Exam.  In addition, Carace was accepted into the 2021 class of the Executive Leadership Program through the National Pest Management Association.

Carace has been married eight years to Pest-End CEO Adam Carace. They have two sons, Jack and Jameson.

“Courtney offers a wealth of knowledge day-to-day along with helping the women in our office grow and feel at home in a pest control industry, which historically has been a male-dominant industry,” Pest-End’s office sales manager, Lizz Lemmon, noted in Carace’s nomination. “Her leadership and guidance have made me and the other women in our company thrive in a way that a future in pest control does not seem so scary.”

With chapters all over the world, Professional Women in Pest Management is an affiliate group of the National Pest Management Association (NPMA) whose mission is to attract, develop and support women in the pest management industry through educational programs, resources and peer networking. Each year, PWIPM: