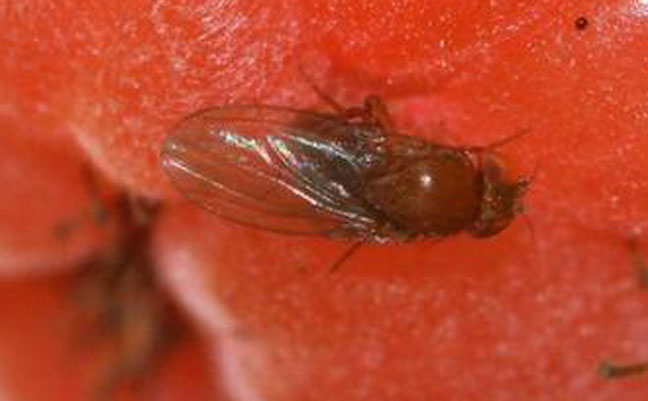 A closeup of a spotted-wing fruit fly on a raspberry. PHOTO: DR. HANNAH BURRACK, NCSU, BUGWOOD.ORG

Spotted-wing fruit flies (Drosophila suzukii) aren’t as common in urban pest management accounts as its cousins, such as the red-eyed (D. melanogaster) or dark-eyed (D. repleta) species. They’re more of an agricultural crop pest. Still, they love rotten food, too, and you might encounter them from time to time. They are native to southeast Asia, and first appeared in Hawaii in 1980. They were first encountered in the continental United States in California in 2008, according to the University of Florida’s “Featured Creatures” extension bulletin, and have since “rapidly spread to new areas including Florida, Louisiana, Michigan, North Carolina, Oregon, South Carolina, Utah, Washington and Wisconsin in the U.S., and British Columbia in Canada.” The bulletin describes the spotted-wing species as follows:

Drosophila suzukii adults are small (3–4 mm) yellowish-brown flies with red eyes. The adults have a pale brown or yellowish-brown thorax with black bands on the abdomen. The antennae are short and stubby with branched arista. Males have a distinguishing dark spot along the front edge of each wing. Spotless males are also possible, but are rarely observed in the field and should be verified by a taxonomist for positive identification. In addition, males have two rows of combs on each fore tarsus, which are absent in females.

Recently, a study led by researchers from North Carolina State University found that this species “prefers to lay its eggs in places that no other spotted wing flies have visited. The finding raises questions about how the flies can tell whether a piece of fruit is virgin territory – and what that might mean for pest control.”

To better understand the egg-laying behavior of D. suzukii, the researchers conducted a series of experiments. And the results surprised them.

Specifically, the researchers found that, given a choice, female D. suzukii preferred to lay their eggs in fruit that other flies had never visited.

“We’re not sure if the flies leave behind a chemical or bacterial marker, or something else entirely – but the flies can tell where other flies have been.”

The researchers say that the next step is to determine what, exactly, the D. suzukii are detecting.

The paper, titled “Social signals mediate oviposition site selection in Drosophila suzukii,” appears in the Feb. 15 edition of Scientific Reports. If researchers can determine, and perhaps replicate, what makes the flies pass on a potential egg-laying site — it could have far-reaching implications for pheromone or other technologies at fruit fly accounts for pest management professionals, too.