Use nonverbal cues to communicate with detector dogs 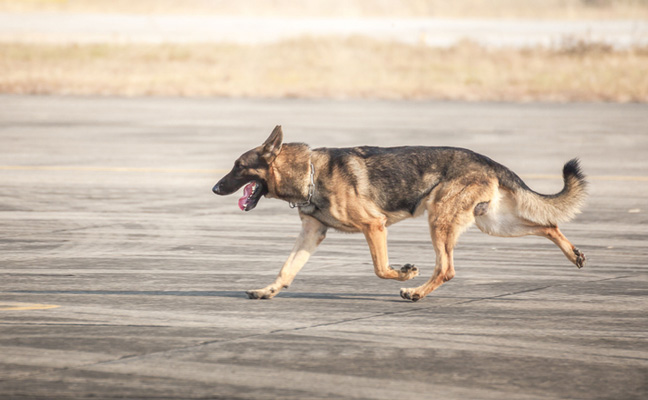 This segment continues the discussion about dog and nonverbal communications between dogs and handlers. This time we’ll discuss why it’s important to learn a little about how to speak dog if we want to have a top dog.

Knowing how to read a dog’s body language is the difference between being a mediocre, acceptably competent handler that gets by and finds odor when it’s present most of the time, and being a great handler that finds things others would miss. The cues dogs offer are sometimes subtle but are recognizable if you know your dog. Quick head snaps as a dog moves through a scene are just one obvious example of important behaviors. Each dog is unique in their specific reaction to detecting target odor, but all of them exhibit some sort of body language changes when encountering odor. Recognizing the signals given by your dog can make the difference in finding some subtle amount of odor or missing something that you should have found.

Realizing what we are telling our dogs with our body language is equally important. Here’s an example; When I was working as a police K9 handler, I got called out at all times of the day and night. I would go to the kennel and get my dog, load up and we would head out to work a fire scene or search for a suspect or narcotics. I went to the kennel every day, usually several times a day and would take my dogs out for a jog or just to play for a bit. But when I would go to the kennel to get one of them to respond to a call, they always seemed to know, even before I opened their run door, that they were going to work and would exhibit a level of excitement that they only displayed when we were headed to a call. How could they know? I can only surmise that my demeanor was different when I was headed to work and my dogs clearly recognized the physical signals I presented when my plan was to do something that they got really excited about.

It’s also important to realize that something as subtle as staring at some area can lead a dog to believe that whatever we’re staring at is important enough to warrant our attention. Given that a dog can follow not only our gaze but also the gaze of bystanders, it should be apparent that we or bystanders can influence a dog’s choice in areas to intensely explore, even if we do so inadvertently. This can lead to false negatives or false positives because the dog mistakenly thinks we wanted it to alert somewhere.

If you’d like to experiment with this, have someone hold your dog while you enter a room with no hides or target odor present and close the door. After a few seconds, have the person open the door and let your dog in the room with you. Give the dog the search command (without pointing) then say nothing else. Keep your body perpendicular to the door but turn your head to the right or left and gaze toward some nearby object or piece of furniture. Most dogs will search around a bit, then come to you or at least look at you for guidance when they don’t find anything. Most dogs will also follow your gaze and go to the item you’re staring at and investigate it.

The bottom line for a handler that wants be part of team that exhibits excellence and stands out from the crowd, is to be aware of and utilize all means of communication that you and the dog use to talk to each other. And remember, odor isn’t the most important thing, odor is the only thing.

This is Part III of a three-part series.