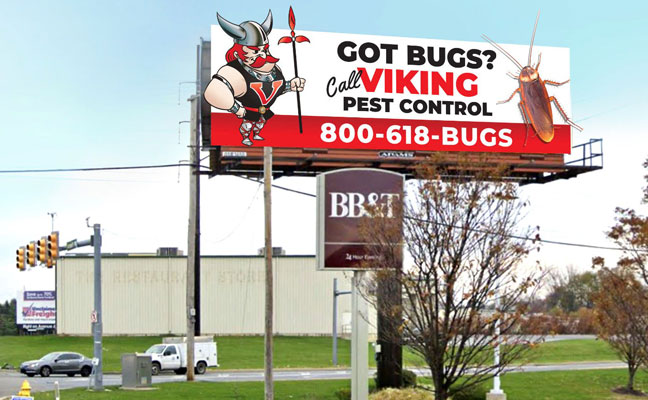 Viking Pest Control, an Anticimex company based in Basking Ridge, N.J., has installed a new billboard locally that features both its mascot and an oversized cockroach.

“Drivers really can’t miss this scary roach as they pass our billboard,” Eric Gunner, Viking’s business development manager, said in a news release. “Rest assured, if roaches or other pests are ‘bugging’ you, we offer the legendary strength of the Vikings to fight them off; if they’re ‘encroaching’ on your home or business, Viking is the answer.”

Another facet of Viking’s marketing strategy is its “Bug A Friend” program, rewarding customers for referrals and offering discounts on first orders to those referred.

Viking Pest Control, an Anticimex company, was founded in 1980 by Pest Management Professional Hall of Famer Ed Bradbury (Class of 2014). With more than 300 team members, it serves residential and commercial properties in New Jersey, Pennsylvania, Delaware, and the Eastern Shore of Maryland.

In 2020, to celebrate four decades of service, the Viking team completed 40 acts of kindness through participation in events and/or monetary contributions throughout New Jersey, Pennsylvania, Maryland and Delaware.