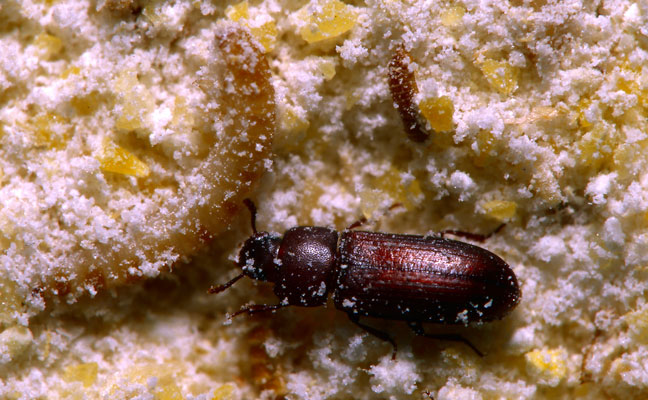 A red flour beetle adult and larvae, as seen in ground corn. PHOTO: COURTESY OF, AND COPYRIGHTED BY, GENE WHITE, PMIMAGES@EARTHLINK.NET

I’d say the headline that the EurekaAlert news team created for the news release says it all: “Beetles that pee themselves to death could be tomorrow’s pest control.”

Researchers at the University of Copenhagen in Denmark used the red flour beetle (Tribolium castaneum) as their test subject of how to use a beetle’s kidney functions against it. This species was chosen not only because it commonly attacks agricultural crops (and in our industry, found frequently in industrial food accounts), but “because it has a well-sequenced genome that allows for the deployment of a wide spectrum of genetic and molecular biology tools.” Also, per the release:

The study was done in collaboration with researchers from the University of Edinburgh, Scotland, and McMaster University, Hamilton, Ontario. Dr. Halberg noted that the study strengthens the team’s knowledge in “which hormones regulate urine formation, (which) opens up the development of compounds similar to beetle hormones.” If researchers can harness that knowledge, they can cause a beetle to form so much urine that it dies of dehydration. Such targeted treatment could be common sooner than we might think.

The study was published in the April 2021 issue of the Proceedings of the National Academy of Sciences (PNAS).