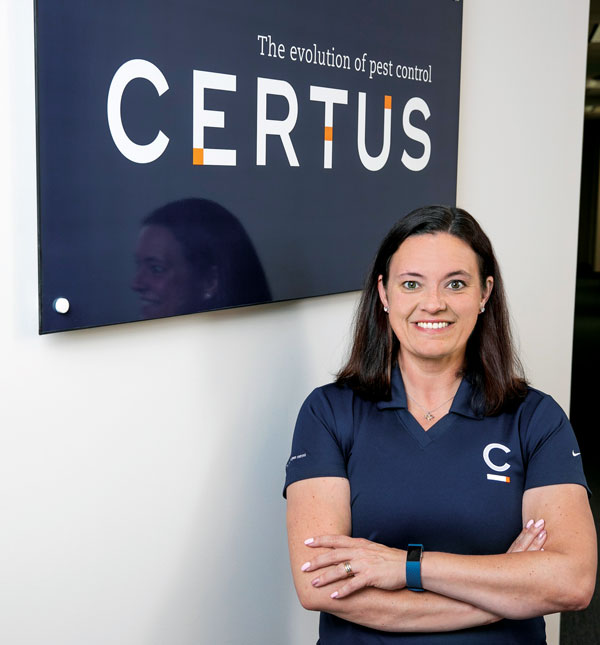 When Desiree Straubinger, BCE, graduated from Purdue University with a bachelor’s of science degree in entomology, she knew how to identify insects, but not how to kill them.

A chance conversation with Pest Management Professional (PMP) Hall of Famer Dr. Austin Frishman (Class of 2002), and a job offer from Steritech (now Rentokil), set her on a pest control career path. Now, nearly 20 years later, she is vice president of technical for Certus, where she leads the Orlando, Fla.-based company’s technical programs and seeks out new solutions for its pest management professionals (PMPs) to use.

“I am always excited about new baits and formulations coming out for ant control,” Straubinger says. “Insects are constantly evolving, so products also must evolve to stay ahead of their control.”

Experience has shown the products PMPs use today may not be as effective in the future, so manufacturers must continue to develop new products with new modes of action and/or new bait matrices for effective control. That’s especially true for ant control, where using the correct control tools for each job is essential.

Straubinger always supplies a variety of baits for ants to feed on when performing ant control. “Ants will change their bait preferences depending on the environments around them, so one day they may be seeking sweet baits, while the next they are looking for protein,” she explains. “Think of it as laying out a buffet of choices for the population to choose from.”

Accurate identification is key to ant control because different species have different preferences. “Using the wrong product can reduce effectiveness, which increases the time to eliminate the ant colony,” she says. “It can even cause the problem to spread to other areas.”

Because ant species vary by geographic location, when Straubinger doesn’t know what species of ants are on the property she is inspecting, she relies on her go-to products. “Every PMP’s vehicle should have a variety of options available to use during their local ant season,” Straubinger adds.

In addition, the peak season for ants varies depending on geography. Ants will be active and foraging in temperatures around 75°F, she says. They will not be as active outdoors when it’s cooler, although they still will be active within the colony.

Weather also has an impact on ant activity, as heavy rains can cause ants to seek dry areas off the ground such as in trees, homes and commercial buildings. Drastic temperature changes can cause ants to find warmer areas closer to structures, Straubinger says.

“Ants have been known to come up through cracks in a slab in the dead of winter when there is snow on the ground, due to the warmth of the structure keeping the soil below thawed and the ants active,” she says.

Several factors can lead to ant infestations, she shares. PMPs likely are familiar with the obvious reasons, which include food left out or dropped in the corners of the floor; and openings in structures that allow easy entry, such as cracks in foundations or holes in stucco. Less-obvious reasons include leaf litter and debris build-up on flat roofs or inside gutters, deep mulch in flower beds, and piles of yard waste.

To help reduce the likelihood of an ant infestation, Straubinger says, PMPs should offer their customers simple tips on how to keep things clean on the inside and tidy on the outside. Outdoor tips include: avoiding heavy layers of mulch by removing old mulch before putting down new mulch; eliminating a buildup of vegetation near structures; and keeping trees trimmed so branches do not touch structures and create highways for ants to enter.

PMPs must manage customer expectations when providing ant control. She recommends making sure customers know that if bait was used on the interior, they will see an increase of ants while they feed on the bait. Also, customers need to know not to wipe up the product you applied or spray the ants they see with pesticides or cleaners that may act as repellents.

Straubinger says PMPs must also help customers understand how long it will take to eliminate the ant colony. “It is not usually an overnight solution when using baits and liquids properly to kill an entire colony,” she adds. “Placing baits in areas that are not in plain sight of your customer will help with this process.”

In addition, PMPs should perform follow-up inspections and treatments after the initial treatment to help ensure ant populations do not rebound after control efforts have been made.

“Sometimes, ants will require a few treatments to eliminate the colony,” Straubinger says. Performing regular treatments on properties known to have continuous issues also will help.

She points out that once the ant population is out of the structure, using repellent products at potential entry points will help keep them outside, where baits and liquids can be effective.

But this strategy comes with a caveat, she says: “It is very important not to take this step until all ants are out of the building, because you risk trapping them inside or causing the population to spread if they are still going in and out at that entry point.”

Taking the time to conduct a thorough inspection helps ensure control, Straubinger says. With ants, you have to have patience.

“When I conduct an ant inspection, it’s not uncommon for me to sit on the floor and watch the ants to see where they are going and where they are coming in,” she says. “It’s time well spent, because if you treat where they actually are coming from, you will get rid of them.”