On May 12 and 13, the 18° Jornadas Técnicas Integrales Para Empresas de Control de Plagas (the 18th edition of the Integral Technical Days for Pest Control Companies) took place online. This annual pest management industry conference was hosted once again by Chemotecnica Division Salud Ambiental, an insecticide manufacturer based in Buenos Aires, Argentina. Presented entirely in Spanish, it is considered to be Latin America’s largest and most influential industry event, with more than 3,000 attendees. This was the second year it was held virtually, and planners hope to host it next year in person.

Andy Linares, founder and president of Bug Off Pest Control Center in Manhattan, N.Y., was the event’s kick-off speaker. This was Linares’ third time participating in the event, this time presenting on “The Importance of Exclusion in Rodent Control.” He has long been a proponent of industry training, offering a variety of courses at his store headquarters and also hosting the annual New York Pest Expo since 2003.

We caught up with Linares to ask about his experience. Read about the other Chemotecnica conferences in which he participated, in 2020 and in 2019. 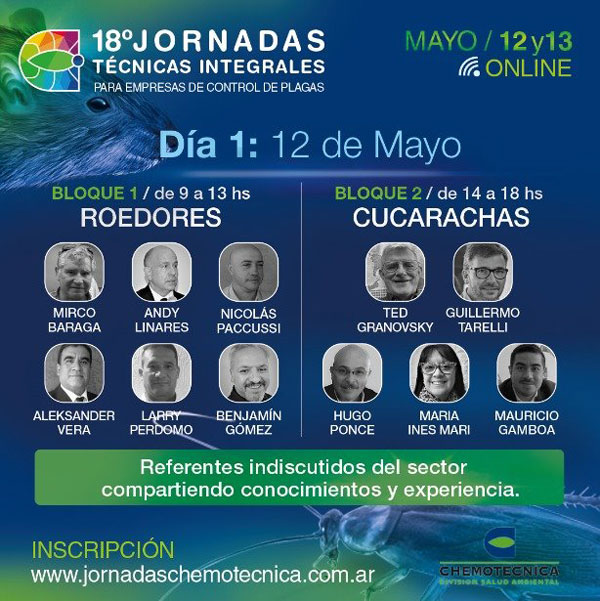 Pest Management Professional (PMP): Wow, so you’ve presented three years in a row for this event.

Andy Linares (AL): I must be doing something right!

PMP: How did you arrive about talking about rodent exclusion this year?

AL: The organizers reached out early in 2021 through WhatsApp. I got a message from their team: “Hey, you wanna play?” I said heck yeah, but what do you want me to talk about? Well, they had the rodent block, and I said that was perfect because I was in the process of creating an exclusion program presentation at Bug Off. It’s going to take place in-person on June 29, an intensive, three-hour workshop.

So, I ended up being the very first speaker at this year’s event, opening the “rodent block” of presentations. I mentioned to the attendees that it was very appropriate to open with exclusion, since it’s really the best technique for long-term rodent control. I focused on the structure, what the weak points might be, what the appropriate materials are in general. My main concept was “address anything that breaks the envelope” of the structure and its perimeter.

PMP: You learned that the event’s audience this year, as it is has been in the past, was comprised of about 50 percent Argentinians, and the rest were comprised of attendees mainly from Peru, Colombia, Venezuela, Mexico, Spain, the U.S. and Europe. What are the primary rodents in Argentina, and are they facing the same kinds of rodent issues that U.S. pest management professionals (PMPs) face?

AL: I was told that the roof rat was the most significant species they deal with, with Norway rats being No. 2. Now, this may be anecdotal, but it’s why I primarily discussed rats in my program. Also, culturally, commercial and agricultural accounts are the most important for PMPs. In residences, people tend to be more DIY. 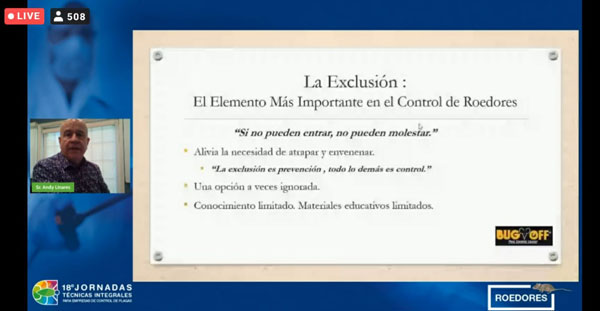 PMP: What kind of feedback did you receive after the presentation?

AL: There was about 10 minutes for questions after every presentation. As with any presentation, the questions ran the gamut from basic ones from new PMPs to intense ones from people with more experience. There were a lot of young PMPs there that are hungry for information that goes beyond the basics. And the more-seasoned PMPs, shall we say, were mostly interested in what’s new in the U.S. market.

Later, many attendees reached out to me afterward because the exclusion concept was unusual to them. They were not aware of the technology, so they were excited about the options they had for exclusion. Many of them asked whether I could share my talk so they could show their teams.

AL: I am once again very impressed how well they pull off this virtual event, very smooth. Still, there’s nothing like an in-person event. It’s entirely up to them whether they invite me. I always try to make it entertaining and fun, and I seem to get a good response. I’m very willing to take another trip to Buenos Aires — especially to get some good steaks and ride a horse again!

Use bait to get control of ants