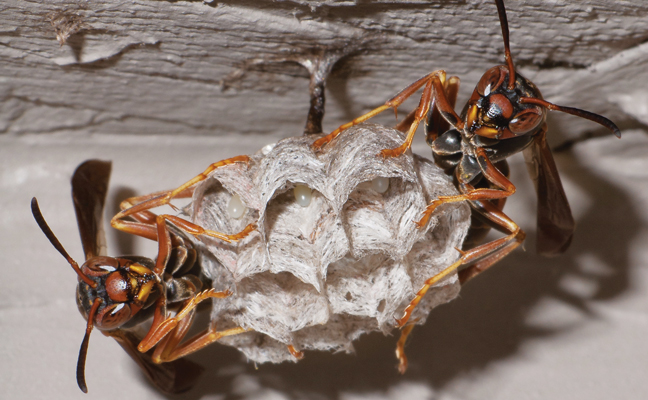 PHOTO: COURTESY OF, AND COPYRIGHTED BY, GENE WHITE, PMIMAGES@EARTHLINK.NET

Paper wasps (Polistes spp.) are one of the common pest species that pest management professionals (PMPs) regularly control around the perimeter of homes in most parts of the country. Upward of 20 different species of paper wasps have been described in North America.

Although paper wasps are not especially aggressive, their stings can be quite painful, consistently ranking between 2 and 3 on the Schmidt Sting Pain Index. A PDF poster depicting the index can be found online.

Entomologist Dr. Justin Schmidt, who created the index in 1983 and has continued to refine it since, has described the relatively mild pain (1.5 out of 4) of P. versicolor, a South American species known as the variegated or yellow paper wasp, this way: “Burning, throbbing and lonely. A single drop of superheated frying oil landed on your arm.”

Typically, paper wasp nests are found hanging underneath eaves, awnings, porches, decks, and door and window frames. Sometimes they can be hidden out of sight, so check underneath and inside garden hose reels, railings, dryer vents, grills and outdoor furniture, too.

In addition to these places, take a few minutes and scan the yard for playground equipment. Carefully check for signs of paper wasp nests in and around the play set. Children can completely overlook a nest until it’s too late.

If you detect stinging insect activity, tell your customer. Let them know what you have found and how you addressed it. By telling your client you took a few extra minutes to protect their children from a sting, you will build additional value into your service.

It is always better for a technician to find and eliminate a wasp nest than have a client discover a nest and request a callback service. Even worse is a callback resulting from a sting.

It is estimated that insect stings send approximately half a million people to emergency rooms each year. Callbacks result in unhappy customers and lost revenue, but a callback that follows a stinging incident can cost your company the account — or worse, the health of your client.