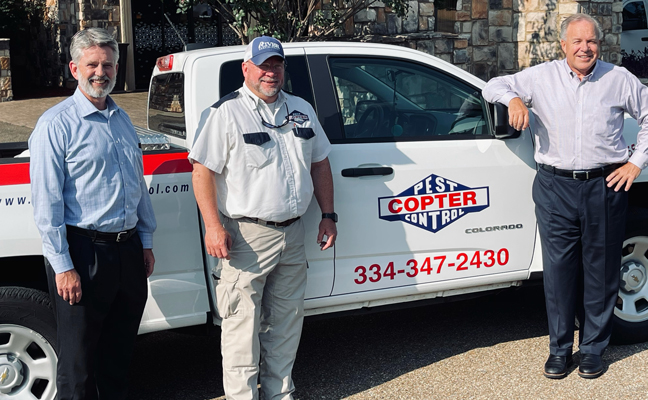 The company serves residential and commercial pest and termite control customers in Coffee and Dale counties. This will allow Arrow to reach a larger number of customers in the Wiregrass Region of the Southern U.S.

“We are excited to welcome the team members and customers of Copter Pest Control to the Arrow family,” CEO Emily Thomas Kendrick said. “Copter’s service professionals are highly effective, efficient and diligent and every team member has an amazing level of respect for their customers, making Copter Pest a perfect fit for us.”

Copter Pest Control was established in 1959 in Enterprise, Ala., and has served the Southeastern part of Alabama for nearly three generations.

“We started looking for a company to merge with earlier this year, a company that would first take care of our team members and treat them as family” said James “Jimbo” Grimsley Jr., president of Copter Pest Control. “When we met with Arrow, we knew we were with the right team as Arrow is obsessed about how customers and employees are treated.”

Copter will now operate as Arrow Exterminators, and its current office will be maintained by the Arrow team. The acquisition raises Arrow’s Alabama presence to 16 service centers throughout the state.

“Jimbo and his team are very well regarded in the state of Alabama and we are proud to have this group of seasoned professionals join the Arrow family,” said Tim Pollard, Arrow’s president and COO.

Family-owned and -operated since 1964, Atlanta, Ga.-based Arrow Exterminators is the sixth largest pest and termite control company in the United States, ranked by revenue. Arrow boasts a modern fleet of more than 2,100 vehicles, 137 service centers, 2,600 team members with revenues exceeding $285 million and in 2020 was named the No. 1 Top Workplace in Atlanta by the Atlanta Journal-Constitution. With QualityPro Certification by the National Pest Management Association, the company offers innovative and environmentally responsible services to protect homes and businesses of customers in Alabama, Arizona, Florida, Georgia, Kentucky, Louisiana, Mississippi, North Carolina, South Carolina, Tennessee, Texas and Virginia.