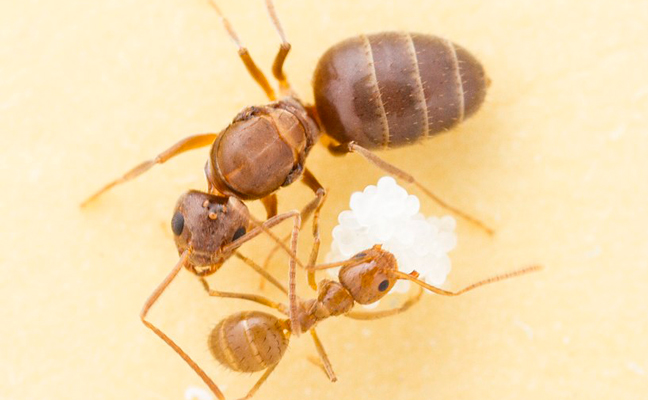 Their findings, which were published in the Proceedings of the National Academy of Sciences, may help PMPs uncover new control methods.

The researchers focused on ant colonies located in Texas and Florida, where the species is prevalent. They determined female tawny crazy ants had a more diverse genetic makeup than expected. While male and female ants have different genetic makeups, the pattern they inherited was unique compared with other species’ genetic makeups.

“Nylanderia fulva is an ant species among the major urban pest in the Southern United States. In early 2000, a severe outbreak of this species occurred in Texas, where our lab is based,” Dr. Eyer says. “This gave us the opportunity to better understand the ecological characteristics of this species that make it a successful invader. And on a broader scale, it also allows us to question whether different successful invasive ant species exhibit a common strategy to invade, or if each species displays its own specific strategy.”

To find out, Dr. Eyer worked with Dr. Vargo and Dr. Robert Puckett, who also is from the Department of Entomology at Texas A&M University. The trio collected samples of the tawny crazy ant across Texas and other Southern states to learn more about the structure and repartition of colonies across the ant population. They also wanted to learn how individual ants from different nests recognize and attack one another.

Previously, most findings on invasive ants have been based on discoveries on well-studied species, such as the red imported fire ant (Solenopsis invicta), or the Argentine ant (Linepithema humile), Dr. Eyer explains.

With the Argentine ant, for example, nests are interconnected within a population, and there is no aggression among ants that are not nestmates. As a result, there is a constant flow of workers and brood among a network of nests that are geographically distant. This network of nests is called a supercolony, and it differs from “regular” colonies that usually inhabit a single nest with ants that show aggression and/or avoidance to neighboring nests.

“We found a supercolonial system in the tawny crazy ant, with no aggression, and an interconnected network of nests across all the Southern United States,” he adds. “In other words, two ants, one sampled in Texas and the other in Florida, will behave as similarly as two ants collected from the same nest.”

He says they also uncovered a unique reproductive system in tawny crazy ants, whereby different genetic backgrounds, or alleles, are selected in males and females.

Their research study states: “Our genetic analyses shed light on a unique pattern of sexual divergence in an introduced population of the tawny crazy ant. We report an occurrence of marked genetic differences maintained between males and females within a single, sexually reproducing species that lacks sex chromosomes….This sexually antagonistic selection may represent a serious cost for colonies, however, as it results in the death of approximately one-half of the female offspring. It may yet preserve genetic diversity in the population and heterozygosity within the female offspring, which may enhance the invasion success of this species, potentially reducing the inbreeding depression that usually follows introduction events.”

“The finding about the sexually antagonistic selection will certainly bring new management options in the future,” he adds. “Our work has shed important new light on the molecular mechanisms underlying sex differentiation in the tawny crazy ant.”

“By constraining the development of individuals in males, for example, through RNA interference bait, we can cut off the reproductive outcomes — the queens — and the foraging incomes — the female workers — of the colonies.”

Looking ahead, Dr. Eyer says, the team is investigating deeper aspects of the genomic region under sexually antagonistic selection, thanks to the help of study co-author Blumenfeld and Megan Moran, a research associate.

“For example, we aim at identifying the specific genes, whose expression levels prevent the development of individuals into a given sex,” he adds. “Similarly, we are investigating whether this strategy is already present in the native range of this species in South America, and whether this strategy is a change that is also occurring after the introduction of N. fulva in the United States.”

The research continues for Dr. Eyer and his colleagues, as new invasive species are introduced and spread a bit more every year.

Recently, they investigated the structure of the colonies of two other major urban pests: the dark rover ant (Brachymyrmex patagonicus) and the Asian needle ant (Brachyponera chinensis).

“Interestingly, we found no supercolonial structure with clear colony boundaries; we found that the nests
of B. patagonicus contain a single queen, while those of B. chinensis can contain hundreds of them,” he says.

In addition, the white-footed ant (Technomyrmex difficilis), which already can be found from Florida to Mississippi, has been reported in Texas. Dr. Eyer says they currently are investigating how the reproductive system of this ant species also may differentially favor its invasiveness.

“Overall, these differences among invasive ant species suggest that different species possesses distinct sets of life-history traits, each of them favoring invasiveness by potentially allowing them to fit a specific, empty niche,” Dr. Eyer adds.