For the first time in two years, members of the pest control industry gathered in person at the National Pest Management Association‘s (NPMA’s) PestWorld 2021.

The event, last held in October 2019, officially kicked off at the MGM Grand hotel in Las Vegas, Nev., on Nov. 2. A strict mask mandate in Nevada, hand sanitizer stations throughout the exhibit hall and stickers on badges indicating attendees’ preferred level of contact were some of the safety protocols in place.

While the final attendance figures are not in yet, the exhibit hall floor was packed with manufacturers, distributors and service providers who were ready and willing to show off their offerings to pest management professionals (PMPs) who seemed excited to be out among colleagues.

NPMA CEO Dominique Stumpf, CMP, CAE, welcomed attendees at an opening ceremony that featured the Rat Pack — Dean Martin, Sammy Davis Jr. and Frank Sinatra — along with Elvis Presley and a couple of beautiful showgirls. “It is so great to be here and to see all of you,” she told the crowd. “Thank you so much or taking the journey, short and long, for showing up and being here so that we can be all together. It feels so good to be back together.”

Day 2 of PestWorld 2021 got off to a patriotic start as a video of Lee Greenwood’s song Proud to be an American, featuring service men and women and the singer himself, was broadcast to a capacity crowd at the Nov. 3 opening general session.

NPMA President Scott Steckel welcomed attendees. Pest control is a family affair, as his father, Jim Steckel, and his grandfather, Dr. H.K. Steckel, served the industry in the same capacity in 1970 and 1937, respectively.

The opening general session presenter, Alex Banayan, is a best-selling author of a book about business lessons he learned while contemplating what he wanted to do with his life when in college. He shared his favorite stories about growth and what he learned from record producer Quincy Jones, filmmaker Steven Spielberg, talk show host Larry King, among others. His presentation was sponsored by Corteva Agriscience.

The day was jam-packed with educational sessions on pest control and business topics. NPMA committee meetings, which were open to attendees interested in serving the industry, also took place throughout the day. The exhibit hall was busy as well, as PMPs took advantage of the time they had to test drive new products in person.

The third day of PestWorld 2021 started early — 6:30 a.m. to be exact — with a Professional Women in Pest Management breakfast sponsored by ServicePro. All women were welcome and encouraged to network with one another. They also cheered on the recipients of the PWIPM’s 2021 Empowerment Grants, who were on hand to accept their plaques and give speeches. Janice Crisostomo, marketing manager for Terminix Commercial, and Kristen Stevens, director of training for Cook’s Pest Control received their awards from Alvin Pest Control President and CEO Betty Thornton, who serves as chair of PWIPM.

Also taking place the morning of Day 3 was the NPMA’s annual Industry Awards ceremony. The recipient of this year’s Pinnacle Award was Joe Thomas, chairman of Atlanta-based Arrow Exterminators. The company’s CEO Emily Thomas Kendrick was on hand to accept the award on her father’s behalf, as he sent a videotaped message of thanks. Other award winners included:

After the awards were handed out, the general session speaker took the stage. Eric Boles, president and founder of leadership development firm The Game Changers Inc., and author of several executive and emerging leader development programs, shared advice on how to develop higher levels of commitment and performance on and off the job.

Boles played in the National Football League (NFL) with the New York Jets and the Green Bay Packers, where he was introduced to many of the concepts of high performance and teamwork he shared. His advice encouraged attendees to be confident and focus, instead of fearing failure. “You are the walking example of what’s possible,” he said. “If you removed your title, how much influence would you have?” His presentation was sponsored by Syngenta.

After another day of checking out exhibits and educational sessions continued throughout the day, all PestWorld 2021 attendees were invited to attend the In the Mix reception held at Topgolf Las Vegas, conveniently located at the MGM Grand hotel. The event was presented by the NPMA’s Diversity Community, Leadership Networking Council, PestVets, and PWIPM. It was sponsored by Corteva Agriscience, FMC, ServicePro, and Target Specialty Products.

The final day of PestWorld 2021 featured PestWorld Day of Service activities for attendees who want to give back. It wrapped up with a poolside PestFest party sponsored by MGK. 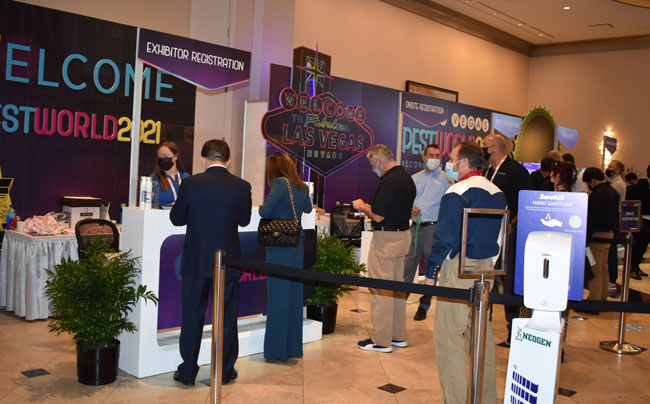 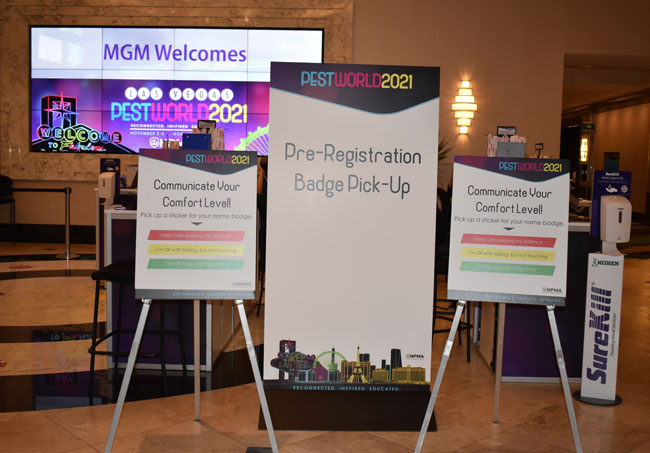 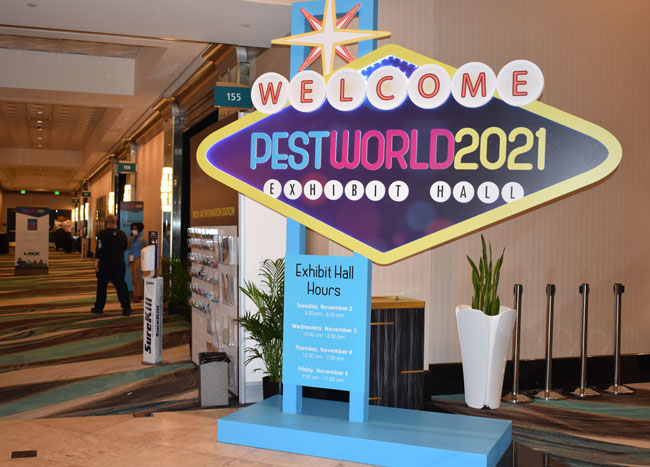 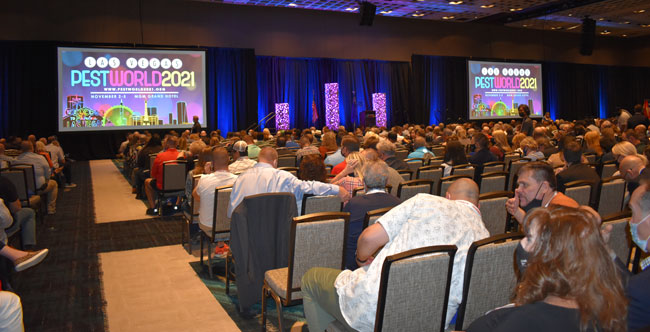 PestWorld 2021 attendees file in to the exhibit hall on day one of the event. PHOTO: PMP STAFF 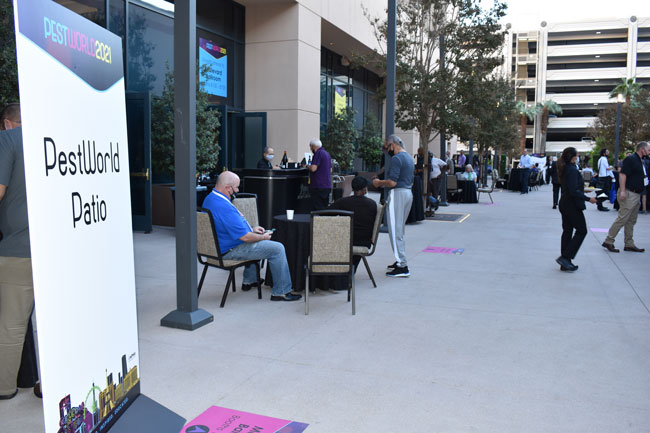 The PestWorld Patio enabled attendees to enjoy temperatures that climbed to the 70s. PHOTO: PMP STAFF 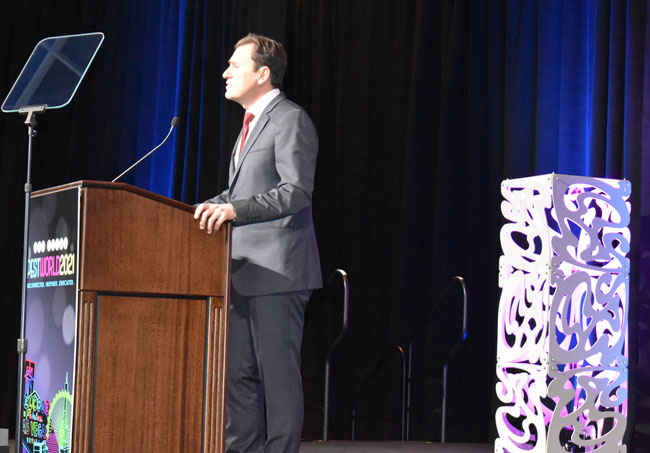 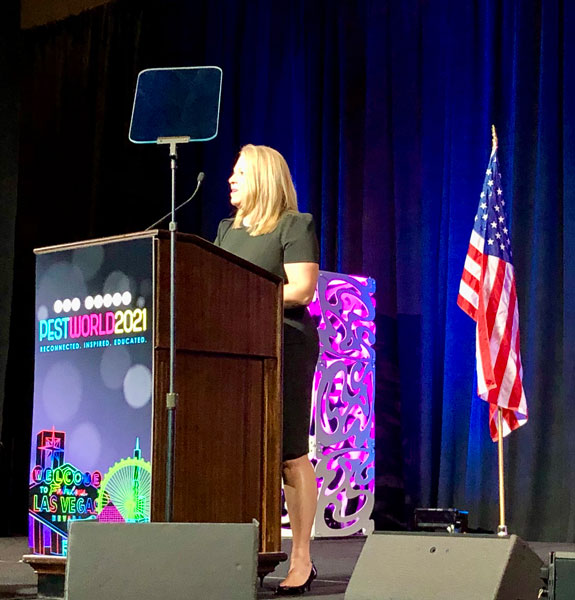 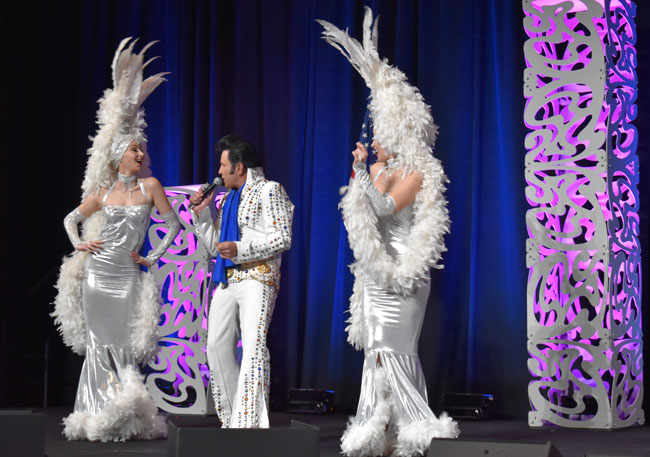 Even Elvis and a couple of showgirls made an appearance at the PestWorld 2021 opening ceremony. PHOTO: PMP STAFF 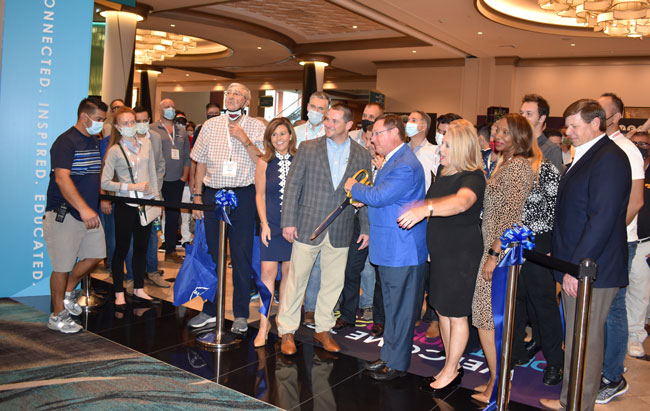 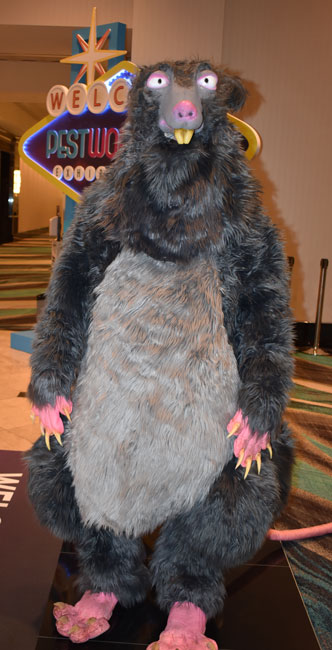 It wouldn’t be PestWorld without a giant rat making its way around the exhibit hall. PHOTO: PMP STAFF 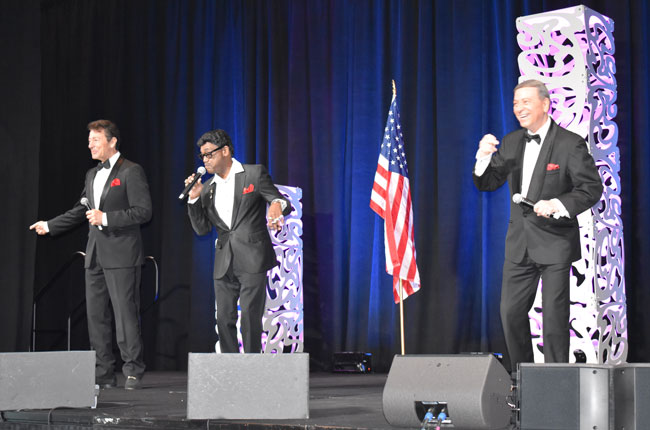 The members of the 2021-2022 NPMA board of directors gathered on stage. PHOTO: PMP STAFF 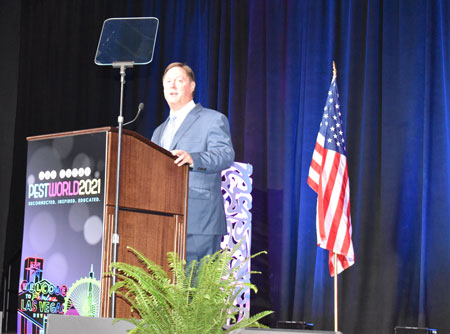 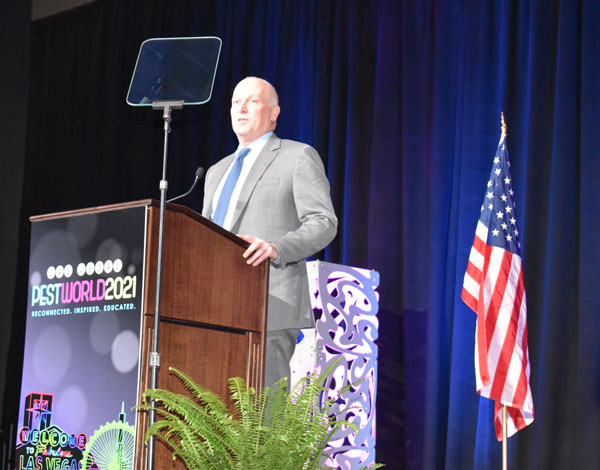 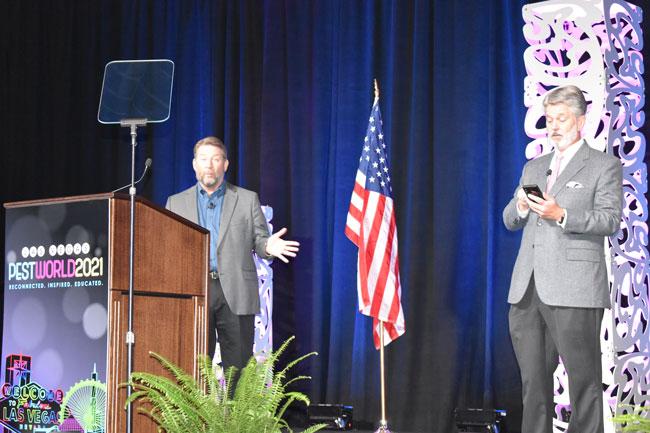 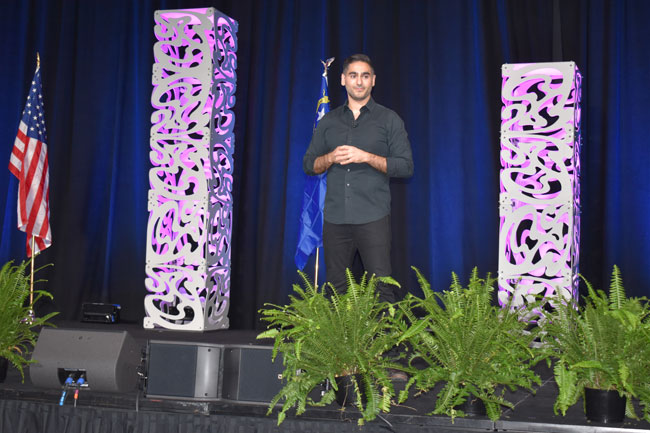 Alex Banayan, who wrote a best-selling book about business lessons while contemplating what he wanted to do with his life when in college, shared his favorite stories about growth. PHOTO: PMP STAFF 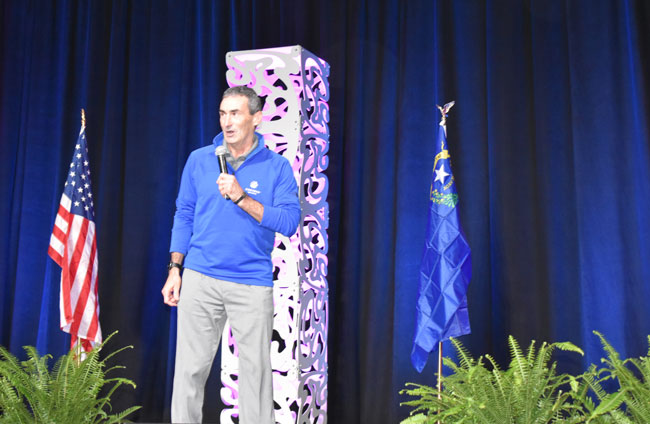 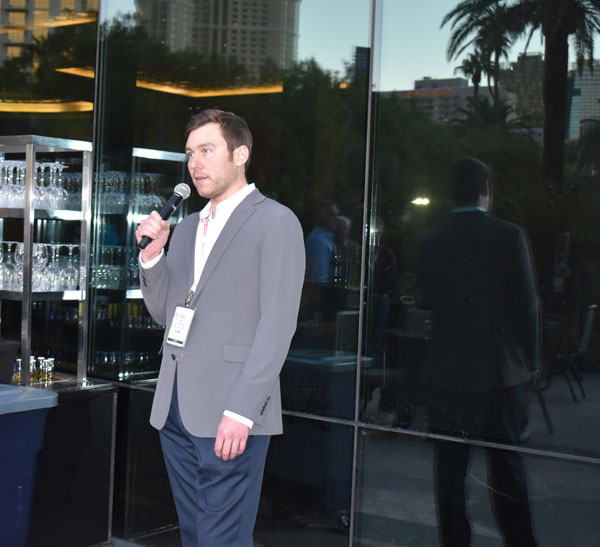 At an evening reception, Jake Plevelich, the NPMA’s director of public policy, thanked the State Policy Affair Representatives (SPARS) for devoting their time and energy to making sure legislation in their states is pest control-friendly. PHOTO: PMP STAFF 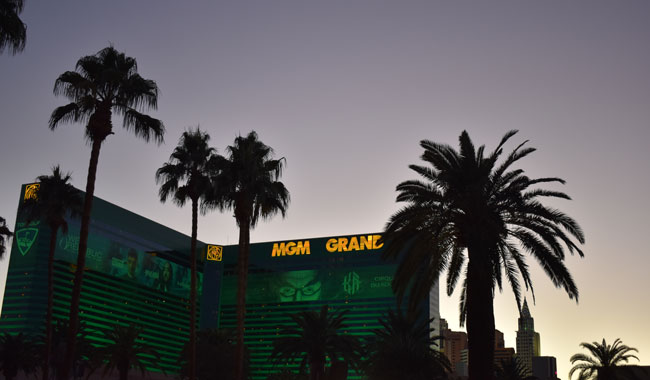 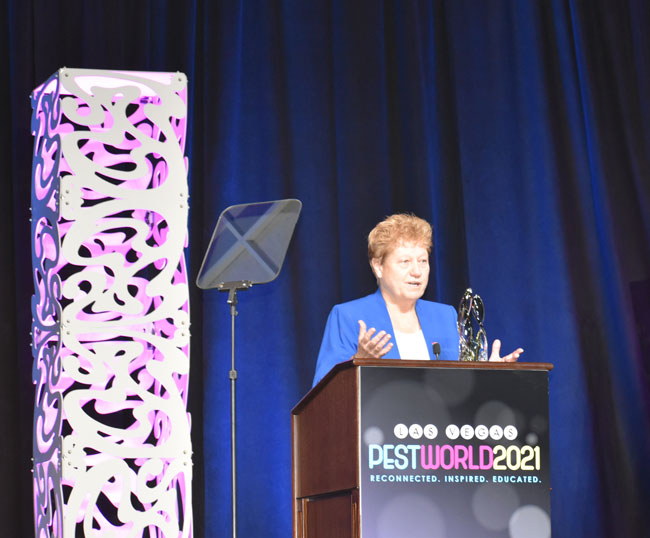 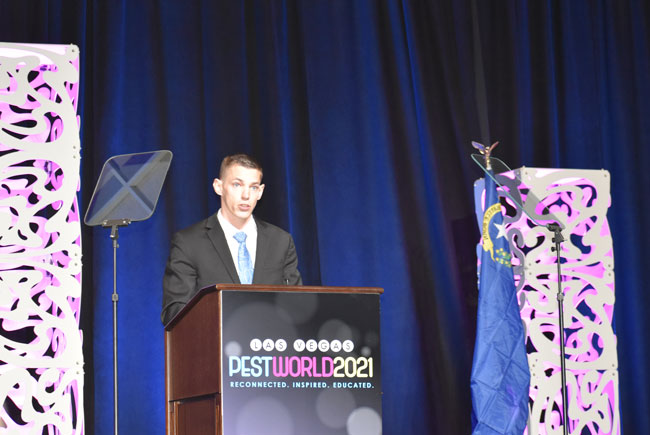 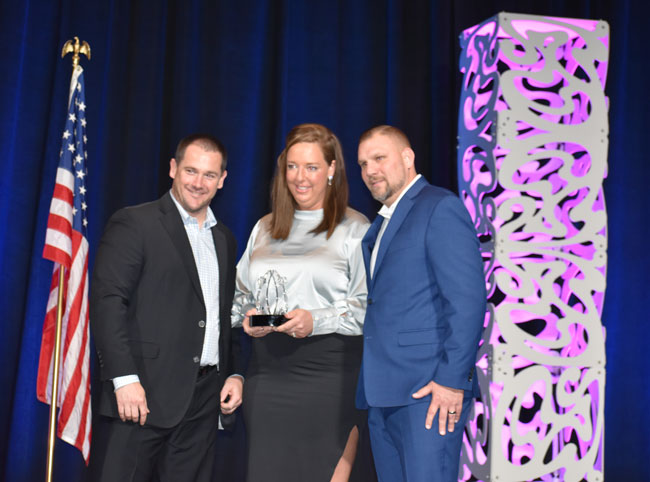 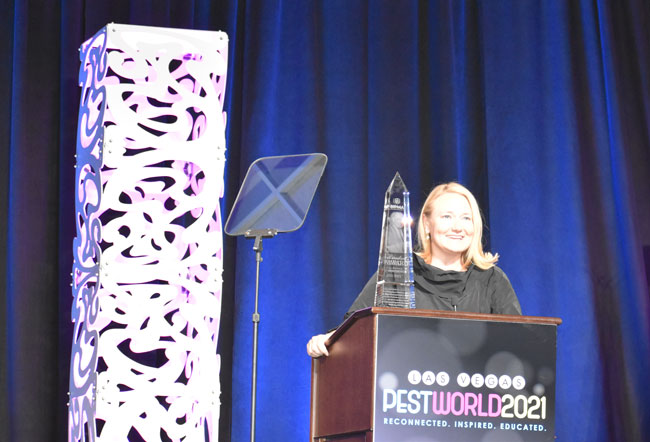 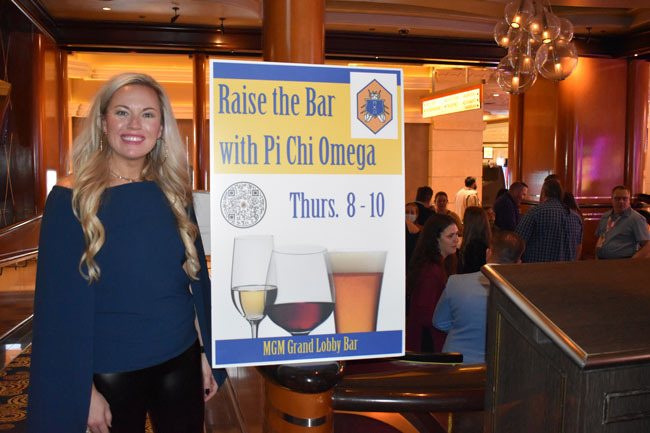 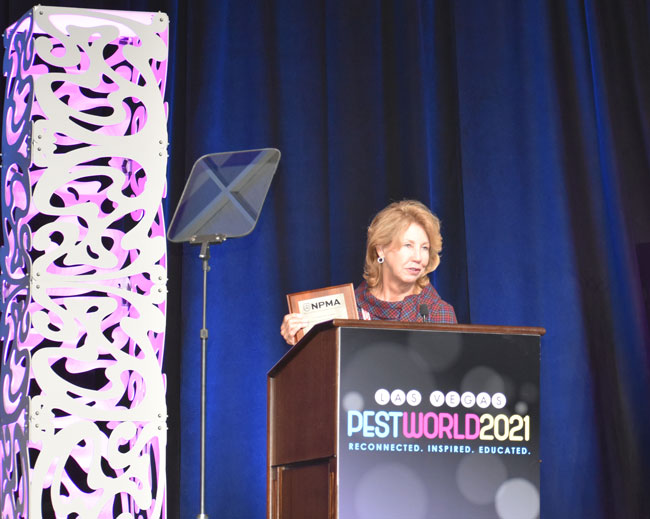 Marie Horner, ACE, received the NPMA’s Chair of the Year award for her work as head of PestVets. PHOTO: PMP STAFF 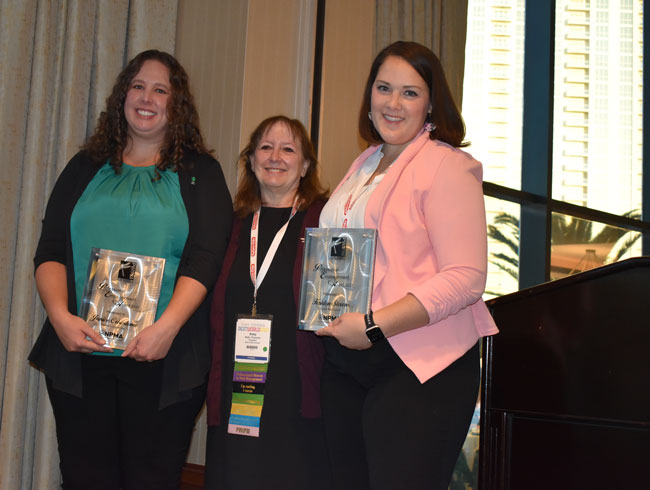 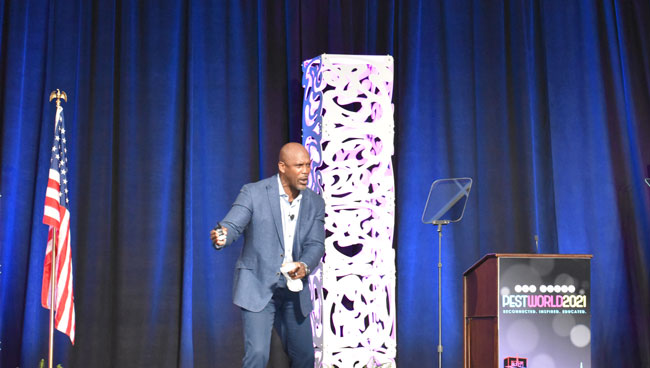 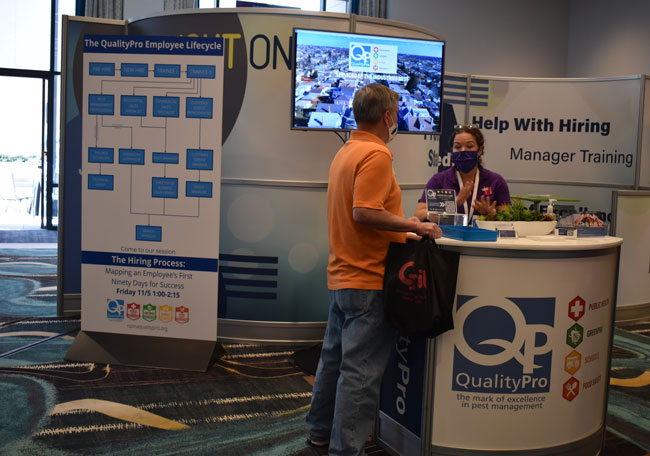