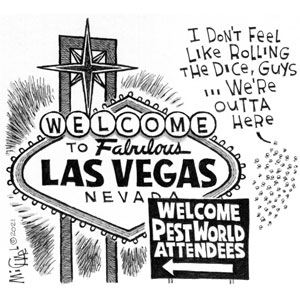 With more than 3,500 people reportedly attending PestWorld, I probably was not the only attendee who was not sure what to expect as I stepped onto the exhibit hall floor in Las Vegas, Nev., last month.

As it turns out, PestWorld 2021 was no different from the others I’ve attended, except for the mask mandate. Side note: Because face coverings obscure everything but a person’s eyes, catching up with pest management professionals (PMPs) and suppliers I hadn’t seen in person in more than a year often became a game of guess who.

After last year’s virtual meet-up, getting together in Las Vegas was as exciting as Sin City itself. Attendees seemed thrilled to see one another again, though that’s just the impression I got when I saw their eyes light up.

PMPs who came to PestWorld did more than catch up with friends and colleagues. They made investments in their companies and themselves. PMPs learned about new products and services designed to save time, materials and money. PestWorld attendees grew their networks and knowledge, and positioned their companies for healthier top and bottom lines in 2022 and beyond.