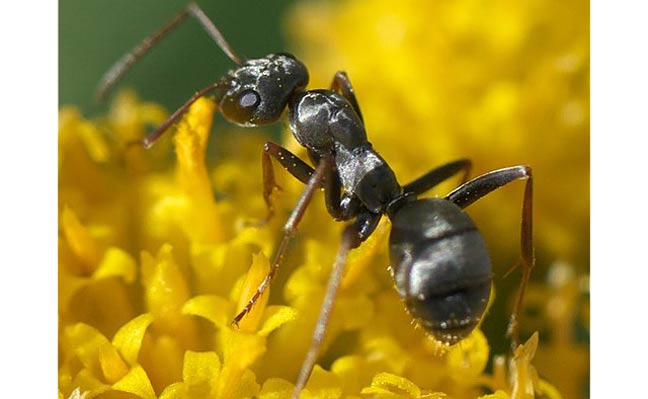 The black lawn ant, Formica podzolica, was one of the species looked at in the study. PHOTO: UC RIVERSIDE

A new study from the University of California-Riverside has uncovered the genetic basis for a “quirk of the animal kingdom: How ant queens produce broods that are entirely male or female.”

“It’s weird to have any parent that’s only producing one sex or the other,” UC Riverside entomologist and study author Dr. Jessica Purcell said in a news release.

According to the release, “scientists have known for some time that ant colonies can specialize in producing all-male or all-female offspring. For the first time, UC Riverside scientists have located a set of genes on a single chromosome that are associated with this phenomenon. Their discovery is described in a new article published by the Proceedings of the National Academy of Sciences.

“When humans mate, both parents contribute one copy of the genome to their offspring. However, female ants are the only ones that carry two copies, like humans and most other animals do, while the males carry only one copy.”

“Male ants develop from unfertilized eggs their mother lays,” UCR evolutionary biologist and senior study author Dr. Alan Brelsford explains in the news release. “Therefore, male ants, as well as bees and wasps, genetically have a mother but no father.”

According to the release:

Drs. Purcell and Brelsford found their study specimens in 2016 while on a journey to collect and study ants from Riverside all the way to the Arctic Circle. In northern Canada’s Yukon territory, they found more than 100 colonies of two Formica ant species that appeared ready for their annual reproductive flights. Back in Riverside, ecology doctoral student German Lagunas-Robles analyzed the genomes of these ants, looking for differences between male-producing and female-producing colonies.

During mating flights, a queen will mate, land, chew off her own wings, and look for a place to burrow. She’ll lay roughly a dozen eggs in that burrow, which then develop into her first brood of workers. These worker ants are always female, but they won’t reproduce. Once they’ve matured, the workers take over foraging for food, and the queen continues to reproduce, laying hundreds of eggs per day.

While the males live for only a few hours after their mating flight, the queen will store their sperm and can use it over the course of the next decade to produce new offspring. The majority of the young in an ant colony are wingless workers, but in mature colonies, queens will also produce offspring that can fly.

Though the researchers found genes associated with which sex of offspring is produced, genetics may not be the only way that queens can influence the sex of their colonies. They could decide not to use their stored sperm, which would result in male ants. Workers could also manipulate the sex ratio of a colony by not feeding or selectively killing certain larvae.

Other studies have documented that the availability of food also has an effect on the sex of an ant colony.

“When extra food is dumped on a colony, it produces fewer males,” Dr. Brelsford said in the news release, noting that the research team wants to conduct additional studies to learn when genes or environmental factors play a bigger role in determining the sex of offspring. They also want to see how these genes work in different environments, to see how breeding periods and other factors can affect the sex ratio of a population.