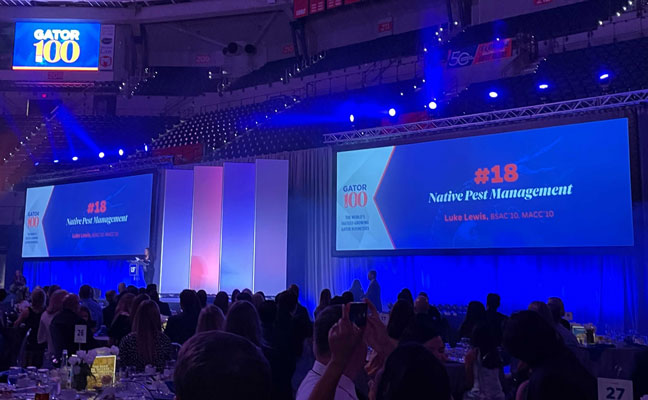 Native Pest Management was named a 2022 Gator100 business, ranked at No. 18. The Gator100 announced the 2022 winners in January and recognized the recipients at an award ceremony on April 22 at the University of Florida campus.

The Gator100 celebrates the world’s fastest-growing, Gator-led business. To qualify for the award, a company must have been in business for at least five continuous years; be owned or led by a University of Florida alum; have annual revenues of $250,000 or more; and operate in sync with the values and images of the University of Florida.

“Over the past few years, the company has been experiencing rapid and tremendous growth. It’s thrilling to see these successful results and all the opportunities that come with them. We take pride in our exceptional services and it shows with thousands of five star reviews on Google, Yelp, Facebook, Nextdoor and the Better Business Bureau,” Lewis said. “I’m hoping we can continue to be named to the Gator100 list in future years, as we are starting to become known as the best reviewed pest control service in West Palm Beach, Fla., and surrounding areas.”

The Gator100 award is Native Pest Management’s fourth honor for 2022.

The company also ranked in the Top 3 of Best in Palm Beach County, won the FLCAJ Readers Choice Award at the platinum level, and received Expertise’s award for Best Pest Control Services in Port St. Lucie, West Palm Beach, Fort Lauderdale and Miami. In 2021, the company won the Better Business Bureau Torch Award for Ethics and made the Inc. 5000 List of the Fastest Growing Companies in the United States.